The house at 409 East Buffalo probably looked more like its Greek Revival neighbor at 407 East Buffalo Street when it was built in 1845. The house was renovated twice, however, and few original features remain.

The rear portion of the house displays Italianate features, including a bracketed cornice and tall, two-over-two windows with bracketed architraves. These features date to renovations done in 1868, when the house was purchased by Charles. B. Curtis, who co-owned the Schuyler and Curtis drugstore.

The Queen Anne features that dominate the house today were added in 1885. They include the turret and wraparound porch, the third story, and several decorative details including the window treatment in the double front doors, the combined use of shingles and paneling, and the elaborate raised festoons decorating the front-facing gables and the cornice above the porch.

The house is called the Hinckley House after the Hinckley family, who owned it at the turn of the century. The property originally went from Buffalo Street to East Seneca Street and included a barn, which later became the Hinckley Foundation Museum in operation between 1969 and the 1990s.

This point of interest is part of the tour: Lower East Hill Historic District 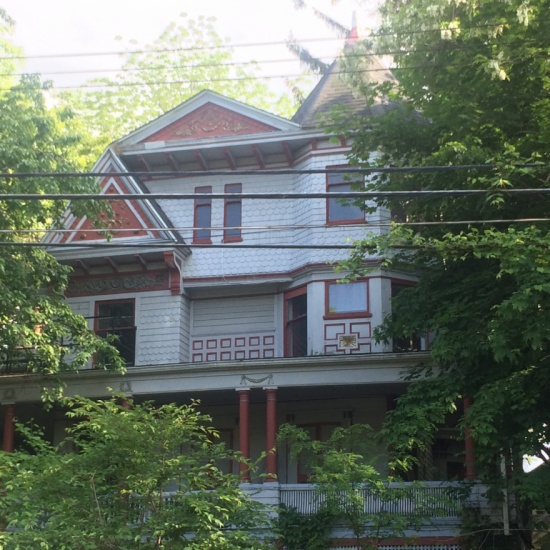