“Big Little Ithaca: A Kid’s Eye View” was completed in 2017. The mural was painted on an electrical box at the corner of E. Court St. and N. Aurora St as part of the second round of the Electrical Boxes Mural Project facilitated by the City of Ithaca Public Art Commission to beautify the city’s electrical boxes. The mural was painted by kids of Ithaca from the Big Brothers and Big Sisters of Ithaca and Tompkins County (BBBS) and Ithaca Youth Bureau programs, and was coordinated by local artists Anna Adler and Marsha Acerra.

The mural was painted as a city map of Ithaca, with landmarks, characters, and highlights generated from children and their mentors at BBBS and the Ithaca Youth Bureau.

Stewart Park, painted at the top of the front of the electrical box, features the carousel, a plethora of flora and fauna, and boats on the lake in the background. Stewart Park was given to Andrew Moody as Military Lot No. 88 in 1790 following his participation in the genocidal Sullivan-Clinton Campaign ordered by then-General George Washington that decimated Haudenosaunee communities across New York State. Moody sold his plot in 1790 to James Renwick, a noted architect in New York City. Renwick is perhaps best known for designing the landmark St. Patrick’s Cathedral in New York City. The plot remained in the Renwick family for 104 years without any major industrial or community development. In the early 1890s, it was divided into two parcels. One parcel was sold to Cascadilla School for building its athletic facilities, which originally included the Cascadilla Boathouse. The remaining parcel was sold to the newly-formed Renwick Park and Traffic Association, which opened the land as a public lakefront park called Renwick Park.

Renwick Park contained a zoo, a merry-go-round, and a pavilion for dances, concerts, and vaudeville theater. In 1915, the park closed and was leased to Theodore and Leopold Wharton for their silent film studio. Wharton Inc. was active in the park, producing over 700 films until the studio shut down a few years later. In 1921, the City of Ithaca purchased the park, renaming it Stewart Park in honor of the late-Mayor Stewart who died only one month prior to the park’s opening. In 1923, the other parcel was purchased from the Cascadilla School and incorporated into the park. The carousel that is currently (2021) at Stewart Park was installed in 1951.

Another location prominently featured in the mural is the Ithaca Children’s Garden (ICG) at Cass Park. The outstanding feature represented in the mural is Gaia the Turtle. This huge snapping turtle sculpture built in 2005 was a collaboration between the three founders of ICG and artists Robert “Bo” Atkinson and Victoria Romanoff. The area on which Cass Park is located was once a wetland home to snapping turtles, as well as a variety of animals, insects, and plants native to the region. Snapping turtles are central to Haudenosaunee (commonly referred to as Iroquois) culture. The Haudenosaunee creation story describes the formation of the world on the back of a turtle, and snapping turtle shells mimic their calendar year. Snapping turtles and the Gaia turtle structure have 13 plates on their top shell, which represent the thirteen lunar months of the year. The snapping turtle also has 28 scales around the rim of its shell that reflect the 28 days in a lunar month. The Gaia turtle was designed by Victoria Romanoff, and the concrete work was completed by Bo Atkinson. The sculpture won the American Concrete Institute Central New York Chapter’s Excellence in Concrete Design & Installation Gold Award in 2005.

The Ithaca Farmers Market first opened for business on Saturdays in 1973 as a venue for local growers, craftspeople, and food vendors to sell their goods. Mary Beth Ihnken, the muralist for this piece, joined the Ithaca Farmers Market in 1994 as an artist and remained a member for 18 years. The market first opened at Agway, and moved five more times before the current wooden structure and pavilion at Steamboat Landing on the Cayuga Lake Inlet was completed in 1988. The open air market pavilion was styled after a 13th-century European cathedral and currently hosts up to 160 vendors each season, as well as thousands of attendees, events, and performances each year. The Ithaca Farmers Market celebrated its 40th year in 2013.

Two of Cornell University's iconic structures are painted on one of the side panels.

The Herbert F. Johnson Museum of Art, a teaching and display museum on Cornell’s campus, is pictured near the top left of the panel. I. M. Pei & Partners received the design commission from the Trustees of Cornell University to design the new art museum in 1968. The iconic “H” shaped building opened in 1973 and was named for its primary benefactor Herbert Fisk Johnson, Jr., a Cornell Class of 1922 graduate. In 1975, the museum was awarded the American Institute of Architects Honor Award, and an image of the building graced the cover of Scientific American. The art museum features permanent collections of over 35,000 works and hosts exhibitions and programs that emphasize arts education for Cornell, Ithaca, and the surrounding region.

The building painted next to the art museum is Cornell University's McGraw Clock Tower, which is located adjacent to Uris Library in the center of the Cornell campus. It was built in 1891 and named for Jennie McGraw, a close family friend of Ezra Cornell. The 173-foot clock tower was originally a library and now houses the Cornell Chimes, a 21-bell set of chimes played daily by “chimesmasters.” The bells first rang at Cornell's opening ceremonies on October 7, 1868, and have since played three concerts daily during the school year with a reduced schedule during the summer and semester breaks, making it one of the largest and most frequently played set of chimes in the world.

At the bottom of this panel you can see the double towers of Ithaca College. These 14-floor dormitories for the school are visible landmarks for Ithaca, especially on New Year’s Eve. In 1965, a tradition began of strategically lighting specific windows in the buildings to create the last two digits of the year. At midnight on December 31, the lights changed to reveal the new year. The tradition has held strong for over 50 years, only missing one year in the early 1970s due to an energy crisis.

To the right of the towers you can see a line of painted Tibetan prayer flags. These flags represent the Namgyal Monastery Institute of Buddhist Studies located on East Hill. Namgyal-Ithaca serves as the North American Seat of the Namgyal Monastery located in Dharamsala India, which is the personal monastery of the 14th Dalai Lama, the spiritual leader of Tibetan Buddhists. Namgyal-Ithaca was founded in 1992 with the mission of offering Western students the opportunity to study authentic Tibetan Buddhism in a monastic setting, as well as providing a cultural center for the Tibetan and Buddhist refugee community living in Ithaca, NY.

The Commons, which is displayed in the center of the front panel of the mural, is a pedestrian mall in downtown Ithaca that first opened in 1975. Pedestrian malls were becoming popular at that time as a means of revitalizing downtown areas of cities. The name “The Commons” was the result of a “name the mall” contest. The winning entry received a prize of $1,000, and was awarded to Bill Ryan, a senior at Ithaca High School. It is said that he came up with the name after visiting Boston Common.

One side of the mural is devoted to messages from the community, describing their memories and comments regarding points of interest. The comment on the bottom of the front panel reads “Ithaca is Gorges,” a phrase coined in the 1970s by Howard Cogan. It is a play on words referring to the beauty of Ithaca as well as the abundance of ravines and waterfalls in the area. Cogan was the owner of an advertising agency that published the logo as a photo illustration on the cover of the Town Crier. He gave the logo to the Ithaca Chamber of Commerce for all to use. In this mural, the artists depicted not only this logo but Cascadilla Gorge as well.

Images courtesy of The History Center in Tompkins County. ca. 2020

This point of interest is part of the tour: History & Art in Downtown Ithaca 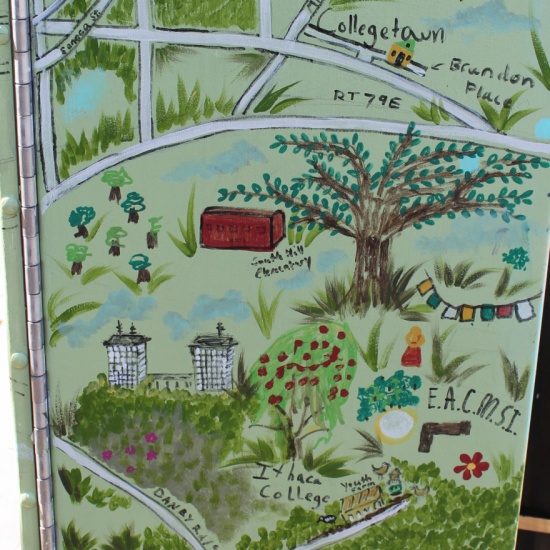 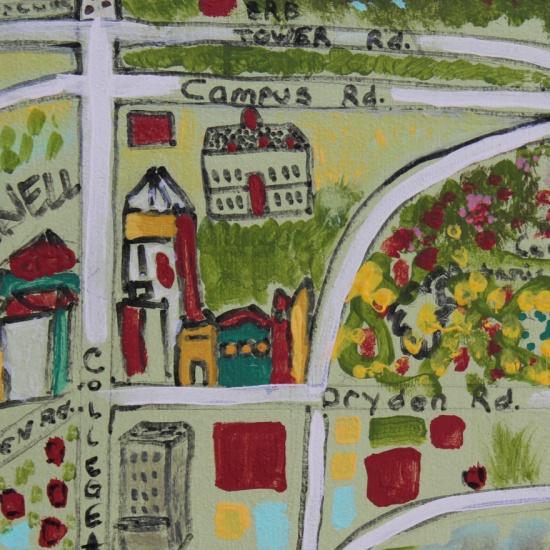 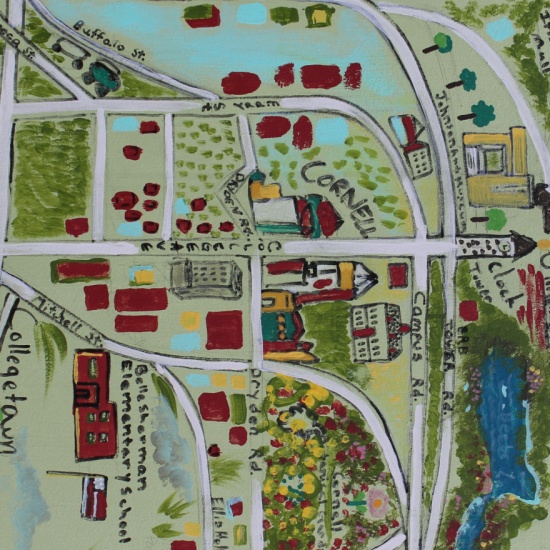 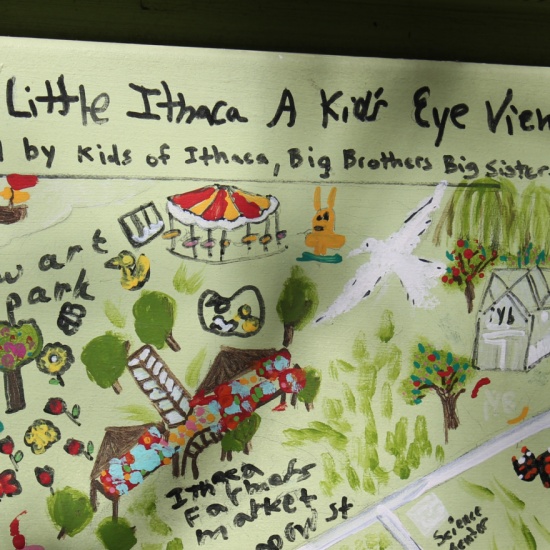