This residence was constructed for Vivian and Joseph H. Armfield in 1915. Joseph Armfield was the son of Esther and George Williamson “Will” Armfield, of Greensboro. Will was a prominent merchant in Greensboro who began a career as an architect late in life, designing numerous buildings around Greensboro alongside his son, Joseph, who served as a contractor. The two story residence at West Fisher Avenue and Simpson Street cost $3,500, and many elements of the new house were reused from a much older structure named “The Elms.” The Elms was constructed around 1856 by Nancy and Cyrus Pegg Mendenhall, and incorporated architectural features derived from a publication entitled The Architect, or Practical House Carpenter by Asher Benjamin. Published as early as 1830, the book was a touchstone for builders across the country who sought advice in detailing Greek and Roman moldings and compositions. Specific components reused from the 1856 house include the double hung windows, and Asher Benjamin’s front door, sidelights, pilasters, Doric columns and overhead entablature.

The house remained in the Armfield family until 2009. 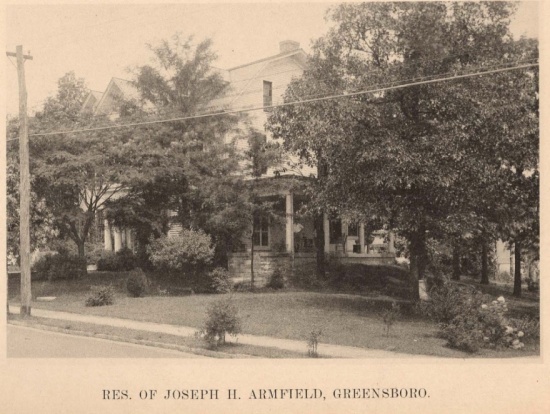