Blaire’s Drug store (Ohio’s Winding Road Marketplace)-As you make your way from the former American Hotel down East Main Street back toward Miners Memorial Park, you will come across the former Blaire’s Drugstore, located across the street from Tecumseh Theatre. Built in 1902 as Blaire’s Cash Pharmacy Edward and Ed Jr operated it until 1960. Notice how the brick is different from the brick used to construct KOL Opera House and the old village jail. This brick is more orange in color and is known as Iron Clay brick. The brick was glazed and fired in a coal-fired kiln. This makes the brick stronger and structurally sound. Better known locally as Seven Chimneys, Rock Run was a brick-making plant located off of State Route 93 on Rock Run Rd, halfway between Shawnee and New Straitsville. If you look inside, you will notice the tin ceilings and individually-placed tile flooring. The tin ceilings, now in white plaster, are similar to those seen in the Shawnee Bank building across the street. The lavish interior features of the store represent the boom time of Shawnee. From 1988-2013 the building served Shawnee as the Community Exchange Gift Shop. Currently, the building provides office space to Ohio’s Winding Road, a grassroots effort to create a regional network of authentic experiences, entrepreneurs, and producers that create a sense of place in southeast Ohio. 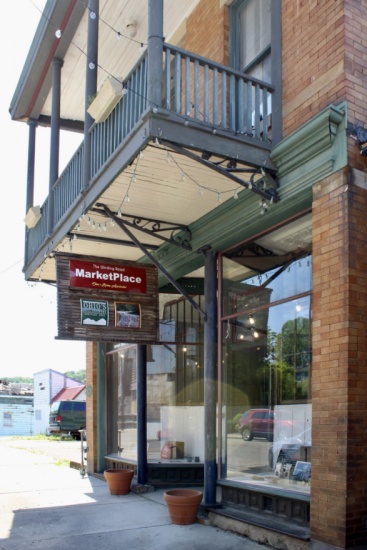