The city-dwellers that lived in Cannon Court enjoyed urban amenities within the heart of prestigious Fisher Park. Cannon Court is representative of pre-war housing available to modest income households in Greensboro beginning in the early twentieth century.

Cannon Court commemorates the birth of “Uncle Joe” Cannon,’ a Republican congressman for the state of Illinois, born in nearby Guilford College. The building is one of several multi-family buildings built in Greensboro during the 1920s at a time when the economy was strong and housing supply was low. The building was popular with single professionals, retirees, and young couples who relied on the convenience of the streetcar that stopped just outside the building.

This property was listed as part of the Fisher Park National Register Historic District on 29 October 1991 and was recognized as a local Landmark Property in August 2014. 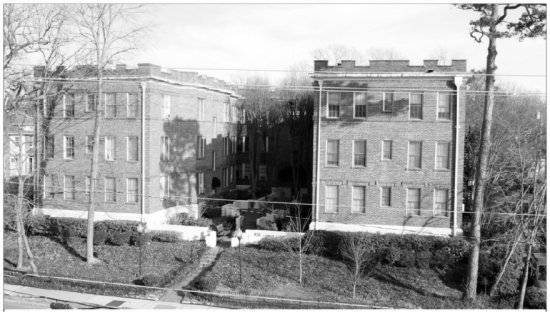