Begun in the 1850s and completed in 1860, the original Chambers building was designed to be the “literal and figurative center of campus life” (Davidson College 1996, 12). The money for the building was given to the college as part of a $250,000 bequest by Maxwell Chambers in 1855.

Chambers ran a large plantation in Mecklenburg county called Spring Hill (NC Board of Agriculture 1896, 246) and may have owned mines in Mecklenburg and Cabarrus county (Ibid., 182). He claimed ownership of numerous enslaved people, and often participated in business ventures with his brother, Joseph Chambers who was engaged in the slave trade in Virginia (Yi and Mellin 2018). While some sources claim he made the majority of his fortune from managing cotton prices (Shaw 1923, 87-8), others strongly imply he was directly involved in the slave trade (Davidson 1969, 16; Burnet 1999, 3). Whether or not Chambers himself was involved in trading enslaved people for profit is largely a technicality, as he undoubtedly amassed his wealth through the labor of enslaved people (principally in the production of cotton) and thus benefitted directly from the slave trade (Shaw 1923, 87-8).

The original Chambers building was assembled from stone quarried at Sloan Mill Place (Holmes 1893, 85), lime mined from Little Mountain, and lumber from Huntersville and further away in South Carolina (Shaw 1923, 90-1). Some bricks were made on local plantations (DC Archives 2015), and others were made on the college’s property (Shaw 1923, 91), but the time period and amount of labor required indicates that much if not all of this work was performed by enslaved people. Following its completion in 1860, the Chambers building housed living spaces, five classrooms, library materials, and a laboratory (Davidson College 1996, 12). In 1921, the building was destroyed by a fire, but much of the original structure (mostly stone and brick) survived (Lingle 1947, 111). It underwent a rebuilding and renovation from 1921 to 1929 (Davidson College 1996, 16). 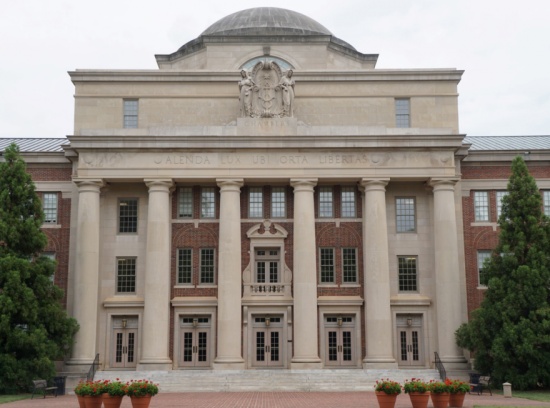