The Axeman of New Orleans

Charles Cortimiglia was an immigrant who lived with his wife and baby on the corner of Jefferson Avenue and Second Street in Gretna, Louisiana, a New Orleans suburb, across the Mississippi River. On the night of March 10, 1919, screams were heard coming from the Cortimiglia Residence. Grocer Iorlando Jordano rushed across the street to investigate. Upon his arrival, Jordano noticed that Charles Cortimiglia, his wife Rosie, and their infant daughter, Mary, had all been attacked by the unknown intruder. Rosie stood in the doorway with a serious head wound, clutching her deceased daughter. Charles laid on the floor, bleeding profusely. The couple was rushed to Charity Hospital, where it was discovered that both had suffered skull fractures. Nothing was stolen from the house, but a panel on the back door had been chiseled away. A bloody axe was found on the back porch of the home. Charles was released two days later, while his wife remained in the care of doctors. Upon gaining full consciousness, Rosie made claims that Iorlando Jordano and his 18-year-old son, Frank, were responsible for the attacks. Iorlando, a 69-year-old man, was in too poor of health to have committed the crimes. Frank Jordano, more than six feet tall and weighing over 200 pounds, would have been too large to have fit through the panel on the back door. Charles Cortimiglia vehemently denied his wife's claims, yet police nonetheless arrested the two, and charged them with the murder. The men would later be found guilty. Frank was sentenced to hang, and his father to life in prison. Charles Cortimiglia divorced his wife after the trial. Almost a year later, Rosie announced that she had falsely accused the two out of jealousy and spite. Her statement was the only evidence against the Jordanos, and they were released from jail shortly thereafter.[22]

Rosie Cortimiglia was the wife of immigrant laborer Charles Cortimiglia. She was attacked alongside her husband on March 10, 1919, while sleeping with her baby in her arms. She was badly wounded by the axeman, but survived the incident.[22]

Mary Cortimiglia was the two-year-old daughter of Charles and Rosie Cortimiglia. She was killed while sleeping in her mother's arms with a single blow to the back of the neck when she and her parents were attacked on March 10, 1919.[22]

Mary's death certificate gives her death as March 9, 1919. Charles and Rosie Cortimiglia do not appear in The New Orleans Directories nor in census records, but Mary's name is reported as Cortimiglia on her death certificate. It would be assumed that this was their real name, and the papers had not mis printed it. So, the lack of data for her parents is puzzling. A Charles and Rosette Courtney appear during this time, but the 1920 census reports them as Black and it's assumed that the Cortimglias are Italian. The name Corti appears numerous times in census and directories, which could have become Courtney. Alas, The similarity in names is perplexing and may never reveal answers.

This point of interest is part of the tour: The Axeman of New Orleans 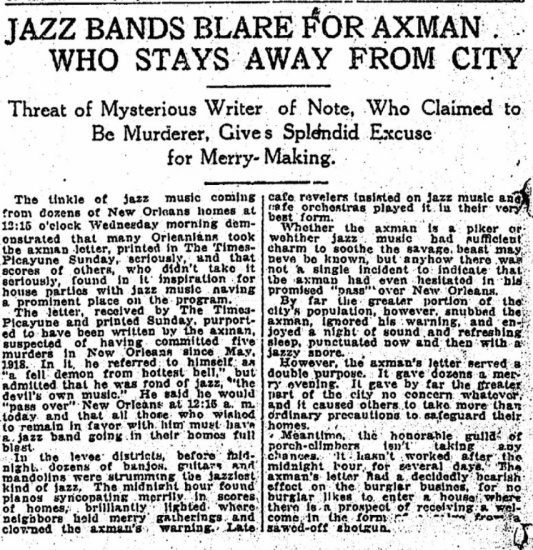