This unusual house stands in downtown Greensboro as one of a very small number of ante-bellum period residences remaining in the city, and reflects the high level of design sought by high income residents of the city during that time. Dr. David Weir was president of Edgeworth Female Academy, a secondary school for women located one block to the south. An architect from Columbus, Ohio named W. S. Andrews advertised in the Greensboro Patriot in 1858 that he was "prepared to furnish plans and drawings for Public Buildings, Villas, Cottages, etc." In his advertisement, he cited as references D. P. Weir. The Weir House is an unusually elaborate and detailed composition, including a double-tiered, full-width front porch and central gable. Paired chamfered posts and delicate sawn bargeboard evoke the Carpenter Gothic style of architecture. The house has been the headquarters for the Greensboro Women’s Club since 1921. In 1961, the first level of the front porch was enclosed, somewhat altering its original appearance. The residence stands among a handsome grove of ancient oaks with a broad front lawn. Private. 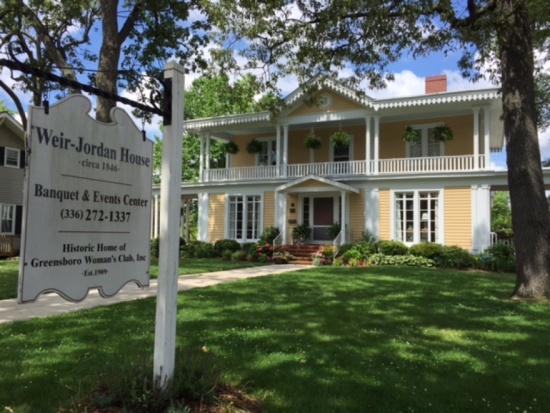