The Felder House was constructed around 1919 by H. H. Felder, the president of the Felder-Briggs Company menswear store in downtown Greensboro. The Felder family only occupied the home for two years before selling it to Helen and W. S. Dickson. Dickson was the Advertising Manager for the Greensboro Daily News. The Dicksons were already Fisher Parkers living on East Hendrix Street when they moved to the Virginia Street house, where they remained for twenty-two years. Eva and J. Howard Gold called the house their home nineteen years throughout the 1950s and 60s. Margaret and Rick Luebke purchased the house in 1987.

The Felder House blends two architectural styles; Craftsman and Tudor. The form of the house, with its side-gabled roofline, prominent oversized dormer window, and even its shingle siding are hallmarks of the Craftsman style of architecture. The Craftsman style was inspired by Asian designs and popularized in the early decades of the 20th century as a simpler alternative to heavily ornamented Victorian homes. The Felder House also features elements of Tudor architecture, such as the half-timbered gable of the front dormer window, the prominent brick chimney, and the casement windows that grace the living room.

This property was listed as part of the Fisher Park National Register Historic District on 29 October 1991 and its restoration won an award from Preservation Greensboro in 2009. 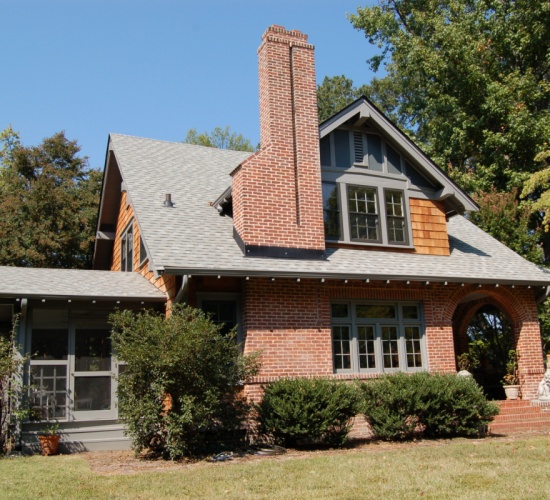