Fisher Park's three religious structures stand within a block of each other on North Greene Street. All were built in the 1920s according to plans supplied by New York City architect Hobart Upjohn. Across the street from the Temple (1923) and overlooking the park is one of the city's largest and most imposing religious structures, the First Presbyterian Church. Completed in 1928, the Norman Revival style was inspired by the Cathedral of St. Cecilia in Albi, France. Harry Barton of Greensboro is recorded as the local and supervising architect; with Hobart Upjohn of New York City as the principal designer.

The brick building is raised high on a massive foundation, its front facade flanked by two rounded corner towers and pierced by an immense rose window. A stained glass window facing the Temple features a Star of David to symbolize friendship between the two congregations. The roof of its 160 foot nave is supported by carved and painted, wooden trusses and stands 85 feet above the floor. The church won a prize from the North Carolina chapter of the AIA, with Upjohn cited as architect.

This property was listed as part of the Fisher Park National Register Historic District on 29 October 1991. 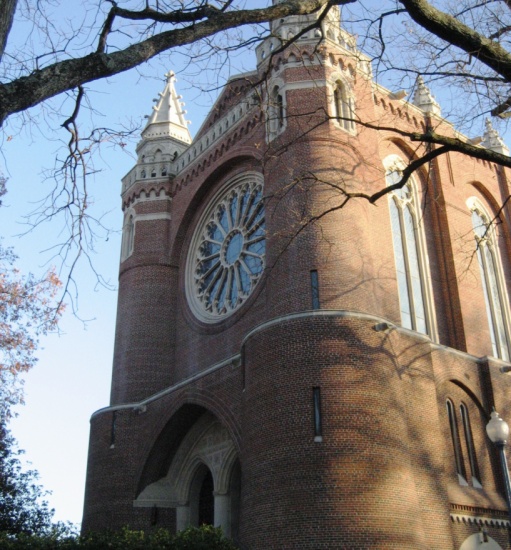