The new city and regional operations offices for Charlotte-based First Union National Bank opened in this 10-story building on February 18, 1971. Among the striking features of the bank lobby were two wall rugs by V’Soske of San Juan, Puerto Rico, a well-known rug manufacturer. The architect for the building was Leif Valand of Raleigh and Daniel Construction was the general contractor for the $2.5 million building. The exposed aggregate sheathing, articulated concrete frame and structure, and deeply recessed windows make this building a late example of Brutalist architecture.

Leif Valand (1915-1985) was a prominent Raleigh architect from the late 1940s to the 1970s. He was born in Norway and immigrated to New York as a boy. Valand attended the Pratt Institute and practiced architecture in Scarsdale, before moving to Raleigh in the late 1940s to work on the Cameron Village Shopping Center. In his prime, Valand was among the most prolific architect in Raleigh. His works includes the Cameron Village Office Buildings and Apartments, Enloe High School, a Federal Building on New Bern Ave, North Hills Shopping Center, the Velvet Cloak Hotel, the Central Raleigh YMCA, and many private residences. Taking on partner Nelson Benzing in 1969, Valand, Benzing was the architect for both Holly Hill and Four Seasons malls. The office tower is now operated as the Self Help Center. 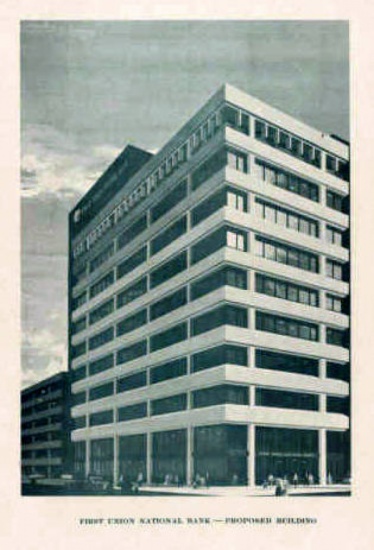