One of three important Gothic Revival residences built in Greensboro, the Gatekeeper’s house represents an era of civic improvement in Greensboro during the late nineteenth century. Constructed in the late 1880s in association with Green Hill Cemetery, the Gatekeeper’s cottage was designed in the Gothic style, including decorative vergeboards, a high pitched-roof, and pointed window hoods; all elements that lent themselves to romantic undertones of the nearby cemetery. It remains the last known Victorian-era cemetery gatekeeper’s cottage in North Carolina. The frame residence was nearly destroyed in 1973 when it was abandoned by the city. It was restored and converted into office use shortly thereafter.

The Gothic Revival style is part of the mid-19th century picturesque and Romantic Movement in architecture, reflecting the public’s interest in buildings inspired by medieval design. The Gothic Revival style in America was advanced by architects Alexander Jackson Davis and especially Andrew Jackson Downing, authors of influential house plan books, Rural Residences (1837), Cottage Residences (1842), and The Architecture of Country Houses (1850). This style was promoted as an appropriate design for rural settings, with its complex and irregular shapes and forms fitting well into the natural landscape. Thus, the Gothic Revival style was often chosen for country homes and houses in rural or small town settings such as Green Hill Cemetery in the 1870s.

The most commonly identifiable feature of the Gothic Revival style is the pointed arch, used for windows, doors, and decorative elements like porches, dormers, or in roof gables. Other characteristic details include steeply pitched roofs and front facing gables sometimes with delicate wooden trim called vergeboards or bargeboards. This home is one of three examples of the style in Greensboro. 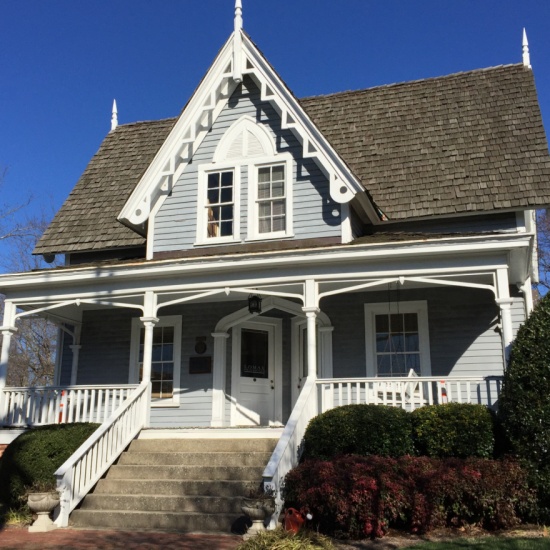