American ginseng, which grows wild in North Carolina’s Appalachian Mountains, is a highly prized root in Asia. The root of the ginseng plant was valuable in China for its medicinal uses that it was harvested in Asia almost to extinction. When American ginseng was discovered, the ginseng trade between Appalachia and China began. Watauga County had many citizens who were ginseng hunters in the nineteenth century. In 1900 Grant Wilcox opened Wilcox Drug Company in Boone. He acted as a middleman in the ginseng trade until he opened his shop in Boone. Then he began to buy from families and country stores in Watauga and surrounding counties, often trading merchandise for the herbs and roots. By 1976, Wilcox Drug was the largest purchaser of botanical goods in the United States. Wilcox Drug merged with a similar company and became Wilcox Natural Products, which closed in 1982. While ginseng is still immensely popular, it has diminished in the wild due to over-collection. Its popularity is especially great in Asia, where buyers can spend close to $1,000 for a pound. The North Carolina mountains remain a significant source for the root, but its collection is strictly regulated by the U.S. Fish and Wildlife Service. 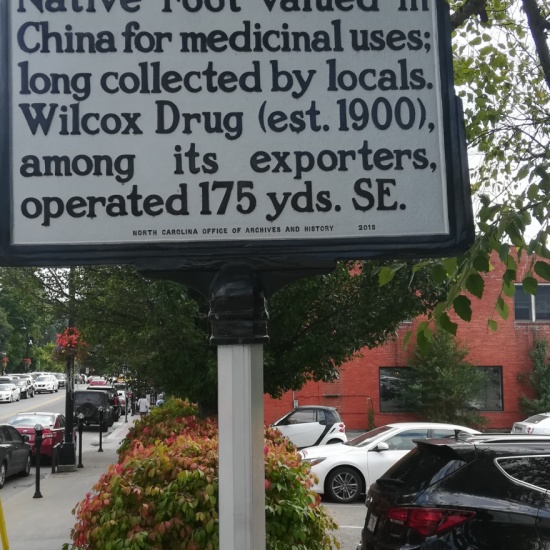