Initially built as the campus for the First Presbyterian Church of Greensboro, this complex of buildings includes the original sanctuary and the adjacent Smith Memorial Building. The complex grew in stages. The sanctuary for the Presbyterian church was built in 1892 as a Romanesque Revival style cruciform-plan designed by Brooklyn, NY-based architect L. B. Valk and Sons. Later, the semi-circular Smith Memorial Building was built in 1903. It features an octagonal plan by Charlotte architect Charles Christian Hook. The church and memorial building were modified and connected in 1938 with a structure designed by Greensboro-based architect William Holleyman. To the southeast of the property is the First Presbyterian Church burial ground, established in 1812. The church vacated the property in 1929, and in 1937 it was acquired by Mrs. Lunsford Richardson, who donated the site to the City of Greensboro and paid for renovations to adaptively reuse the complex as the Richardson Civic Center. It subsequently housed the Greensboro Public Library, the Greensboro Historical Museum, and the Greensboro Art Center. The historic building functions as one part of the current, larger Greensboro Historical Museum campus. To the east of the museum are two log buildings that were reconstructed to depict early piedmont housing. The Greensboro Historical Museum, founded in 1924, is the second oldest local historical museum in North Carolina. Open to the Public. 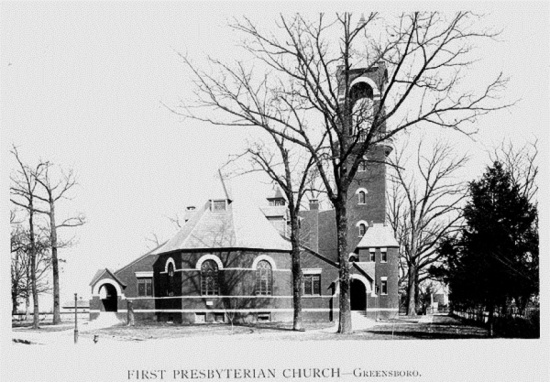