Fisher Park's three religious structures stand within a block of each other on North Greene Street. All were built in the 1920s according to plans supplied by New York City architect Hobart Upjohn. The first was the central block of Holy Trinity Episcopal Church, constructed in 1922. The Gothic Revival style structure is sheathed in rough random ashlar stone accented by limestone trim, leaded glass windows, and a slate roof. The building was constructed to define the western wall of a central courtyard originally planned by Upjohn.

The second building phase was designed by the fIrm Cram and Ferguson of Boston. The firm did relatively little work in North Carolina, but commissions include Trinity United Methodist Church (1924) in Durham, the Trinity Episcopal Church (1912) in Asheville, and St. Paul's Episcopal Church (1928-1929) in Winston-Salem.

The third building period included Holy Trinity’s sanctuary designed by Greensboro-based Albert C. Woodroof. Woodroof was an architect based here in Greensboro that acted as a local representative for Cram and Ferguson in Boston. Woodruff and his son designed a variety of schools, churches and civic structures throughout North Carolina. The style of the building remained connected to the Gothic Revival motif.

This property was listed as part of the Fisher Park National Register Historic District on 29 October 1991. 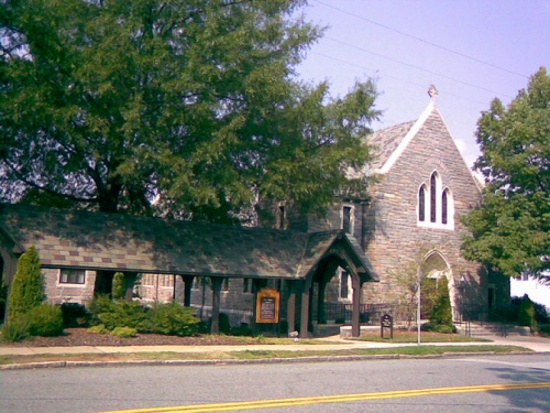