Julian Price, the president of Jefferson Standard Life Insurance Company, was a patron of architecture. In 1919, New York architect Charles Hartmann came to Greensboro to design a Foor and Robinson branded accommodation named the O.Henry Hotel on North Elm Street. Price met Hartmann and offered him the job of designing a major project – the corporate tower for Jefferson Standard Insurance, if he’d move to Greensboro and open a practice. Hartmann accepted the offer and spent the rest of his life in Greensboro designing notable buildings throughout North Carolina.

Price sought to build the corporate tower for Jefferson Standard as the highest building between Washington and Atlanta because he recognized the manner in which the public sought “to identify their financial institutions with impressive buildings that inspire confidence.” Pragmatically, he wanted all employees of his growing company in one building instead of being scattered in a half a dozen buildings across the city. The skyscraper cost $2.5 million, plus $177,000 for the land on which the former county courthouses once stood, both paid in cash. Upon completion, the insurance company occupied only five floors in the tower the rest was leased to doctors, dentists, lawyers, insurance agents, various clubs, and contractors. The eclectic architectural theme of the tower leans on Beaux-Arts design, but blends Baroque details such as rounded arches and Solomonic columns. Private.

Style: Beaux-Arts. Listed to the National Register of Historic Places in May 1976. Greensboro Preservation Award 2011. 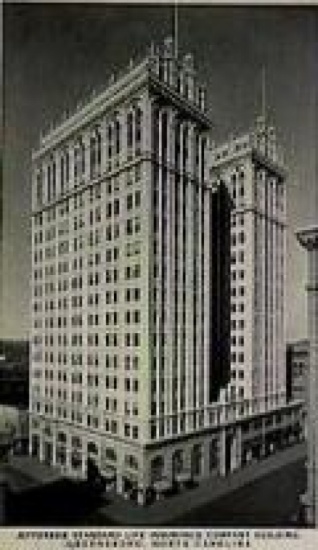