The Latham-Baker House was commissioned in 1908 by James Edwin Latham, a Greensboro cotton broker who was prominent in the civic development of the city throughout the early twentieth century. Latham’s wife, Maud Moore Latham, and their daughter, May Gordon Latham Kellenberger, expressed interest in history by serving on numerous historical societies in North Carolina. Both played pivotal roles in the reconstruction of Tryon’s Palace in New Bern. Begun in the fall of 1908, the house is a rare Greensboro example of residential Prairie School architecture, a philosophy of style that emphasized the strong horizontal lines of the American prairies. In keeping with the style, the house displays a pronounced horizontal emphasis that is accentuated by broad overhanging eaves, a pronounced belt course of granite between the first and second floors, and elongated granite window boxes. Other distinguishing features include the random laid granite exterior walls and green tile roof, all of which contributed to the progressive and conspicuously modern design of the house.

The Prairie style is a true American creation, developed by the American architect Frank Lloyd Wright. Wright was part of an impressive group of talented architects known as the Prairie School operating in Chicago at the turn of the 20th century. Wright said of the style: “The prairie has a beauty of its own and we should recognize and accentuate this natural beauty, its quiet level. Hence gently sloping roofs, low proportions, quiet sky lines, suppressed heavy-set chimneys and sheltering overhangs, low terraces and out-reaching walls sequestering private gardens.” The shape and form of the Prairie style house was distinctly different than previous domestic architecture. 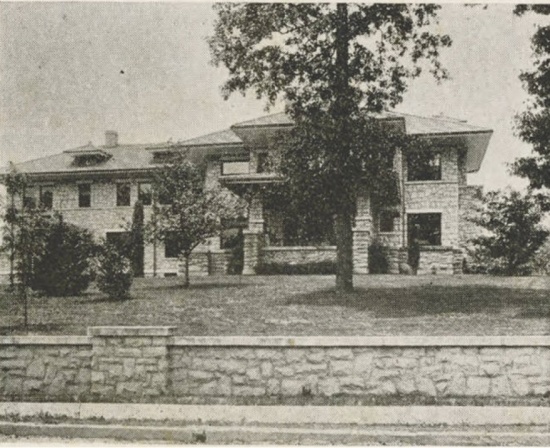