The residence at 104 Fisher Park Circle is among the earliest in Greensboro to exemplify Craftsman architecture. The Craftsman “Bungalow” style began in southern California, where South Asian and East Asian features blended to create exotic and innovative styles well suited to sunny climes.

In April 1913 The Greensboro Patriot announced, “Mr. and Mrs. Charles D. Benbow, Jr., are moving into their new home on North Park Drive, where they expect to be at home to their friends the later part of the week. This new home is a 12-room bungalow, modern and beautiful, and is a lovely ornament to the Fisher Park section of the city.” The shingle-clad structure features a handsome stone foundation and porch supports of Mount Airy granite, likely hand-laid by master stonemason Andrew Leopold Schlosser. Asian-inspired features of the two-story home include exposed rafter tails, knee braces, and wide overhanging eaves.

Interior details are among the finest Arts and Crafts appointments in the city, including the pierced, sawn stair balusters in the entry hall. Classically inspired wood triglyphs beneath the mantel, a coffered ceiling, and a section of original fresco round out the unusual features of the 3,300 square-foot home.

Charles David Benbow, Jr., well-known in social and business circles in the Gate City, was a member of the well-respected Benbow family of Oak Ridge, pioneering Quakers with roots pre-dating the American Revolution. A 1909 graduate of Guilford College, C.D. Benbow’s reputation grew professionally in real estate and auto sales. He married Marjorie Long in April 1911 and bought they purchased a lot overlooking Fisher Park shortly thereafter. Benbow was proprietor of the Benbow-Long Sales Company, the local distributer for Hudson and Dodge Brothers motor cars.

During the Great Depression, Benbow became indebted to Prudential Insurance, and the family struggled to maintain ownership of the house. It was sold by Prudential in 1937 to Louise and Thomas Hunt. Hunt began his career with cars in 1914 and ran the Packard distribution network for 22 Carolina counties. The couple raised three children in the house: Joan, Kay, and Cammie. The Hunts maintained the home until Thomas died in 1964. It then passed to Pearl and Ernest Emory and remained in their family until 2005. Orren Weisberg Falk enjoyed living in the house with her three children before selling it to Liz and Carl Nilsson in 2013. 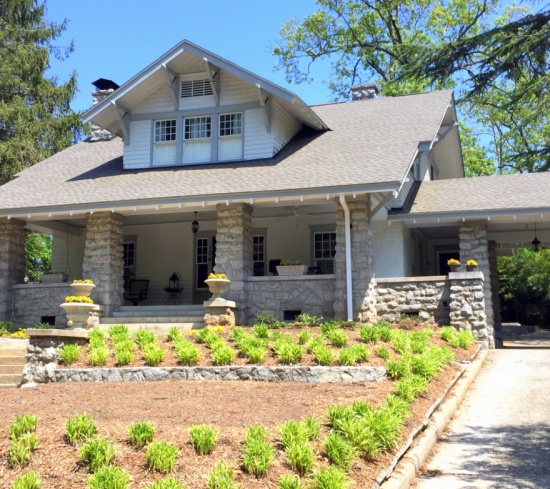