The Masons have had a notable influence in the community, claiming members such as hotelier Christopher Moring, industrialist Henry Humphreys, attorney and Mayor Cyrus Mendenhall, businessman Julian Price. The organization set the cornerstone for their Greensboro Masonic Temple on March 20, 1928. Greensboro architect John B. Crawford was hired to provide plans and James Fanning was selected as the project’s General Contractor. The monumental stone façade is evocative of a Grecian temple, complete with fluted engaged columns topped by curled Ionic capitals, a Greek-key stylobate, a triangular pediment topped by an anthemion (Greek term for “flower”). Upon the entablature is inscribed EIS DOXAN THEOU "To the glory of God." Behind the impressive public façade is a highly ceremonial interior laden with symbolism and ritual. Above the meeting chamber is the Scottish Rite Room, a palatial space flanked by theater-style seats and centered upon an elaborate stage. The polychromatic room takes an Egyptian theme, with sphinxes guarding the stage, and high columns topped by papyrus capitals. Private. 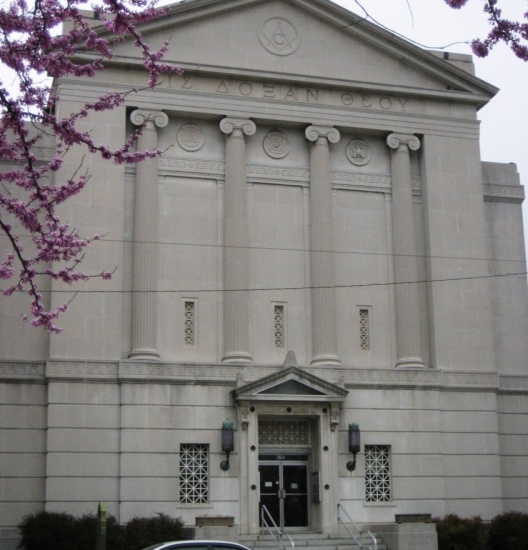