The Michael Sherwood House stands in downtown Greensboro as one of a very small number of ante-bellum residences in the center city. The house was probably built between 1849 and 1851 for Michael Swaim Sherwood, publisher (1839-1860s) of the Greensborough Patriot. He was a relative of William Swaim, the well-known founding editor of the Patriot newspaper and grandfather of author William Sidney Porter, aka O.Henry. Michael Sherwood’s Greek Revival house was constructed on a five-acre tract of land on the western fringe of the village, The two-story brick structure features closed pediment end-gables, a rectangular transom window, and simple six-over-six windows. The two-tiered Tuscan portico is an early twentieth century addition. Handsomely landscaped with feature trees, the Sherwood House remains a rare surviving touchstone to the antebellum period amidst one of North Carolina’s largest cities. Private. 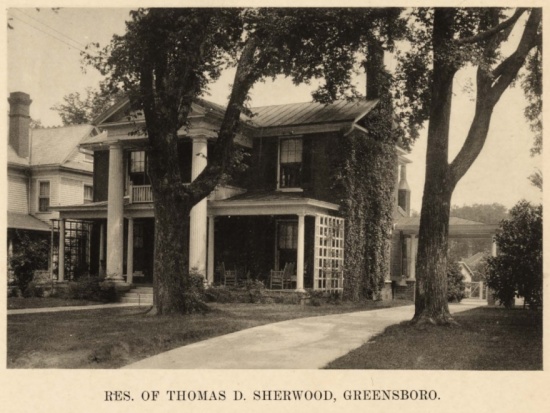