The Minnie Lyon and Frank Leak house was built in 1913, designed by one of Greensboro’s esteemed architects, J.H. Hopkins. It has been vacant and the victim of neglect for ten years. The house was purchased in 2017 by the Preservation Greensboro Development Fund and was sold in 2018 to a partnership with plans for a complete restoration and office use.

Minnie Lyon was born in Oxford, NC until her family moved to Greensboro’s Lindsay Street. Frank Leak was born in Kernersville, son of a tobacconist. They married in 1901, and he took a job as bookkeeper with the Cone Export and Commission Company. The couple had two children, Mildred and Mary Lyon. Mary Lyon later married Arthur Caine, and in 1966 she became the first president of Preservation Greensboro. Mary Lyon’s daughter, Anita Caine Schenck, also grew up in the house, and she, too, was deeply involved with leadership of Preservation Greensboro.

Plans for the house are not dated, but indicate the architect was J. H. Hopkins, a leading architect in the city between 1905 and 1920 who designed several prominent commercial structures and private residences. A native of Baltimore, he also practiced in Florence and Sheffield, Alabama, and in Tennessee. Most remembered in Greensboro for designing the Dixie Building and the McAdoo Building, both on South Elm Street, the Leak House is a rare survivor of his residential work.

This handsome brick Colonial Revival, references details sometimes seen in the Chesapeake Bay area. These include a symmetrical façade, a central porch, and side porches topped by Chippendale balustrades. Additional features include a magnificent modillion cornice, three dormer windows and a parapet side-gable roofline. Interior appointments include deep crown moldings, an elegant staircase, austere brick mantels, and a high plate rail in the dining room. The architecture may better reflect Hopkin’s background than the design choices of the Leaks.

Frank served the community through his involvement in the First Presbyterian Church as well as social clubs such as the Merchants' and Manufacturers' Club, the Greensboro Country Club, and the Civitan Club. He died in the house in 1936. Minnie remained there until 1952. J.V. Berry acquired the property and retained ownership until 1979. Jim Wentz purchased the property in 1989, planning to restore the house as income property, but the project’s financing failed. 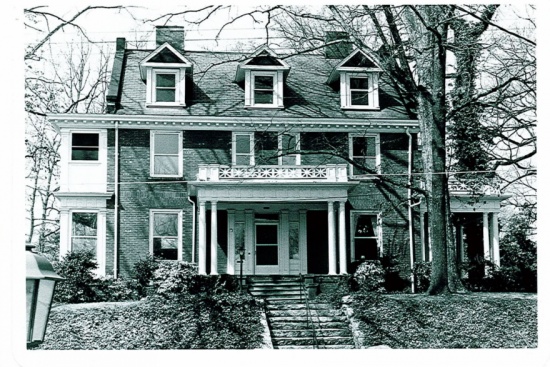