Designed by architect Carl Myatt for himself and his wife Wanda, this Postmodern design references key themes of Fisher Park architecture without mimicking historic features. The house was constructed in 1996 by interpreting the Greensboro Historic Preservation Commission’s Design Guidelines. The Guidelines are used to evaluate construction within the district, and this composition is considered successful decades after construction.

Postmodernism was popular as early as the late 1960s and remains in use today. It recognizes elements of traditional styles and materials, but often juxtaposes components of earlier architecture in new ways. This house is aligned along two axes in the manner common to traditional houses. One axis is oriented from the street-front to an existing rear garage. The second axis intersects the first by connecting a fireplace mantle with a pre-existing magnolia tree. The facade of the house references features found throughout the neighborhood, including a split-face stone foundation, a wide front porch, and upper level balconies. Other features exaggerate architectural features of Fisher Park, including a whimsical tower and a red metal roof.

As one of Greensboro’s best examples of Postmodern design, this house represents an important chapter of American architecture that was born by rejecting bold forms of Modernism. Instead, this architecture reinterprets existing neighborhood forms in new ways, and was arguably the perfect style for one of the premiere streets of Fisher Park. 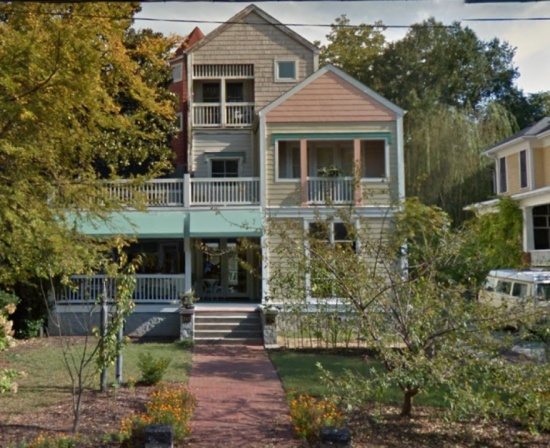