If you want to see one of the prettiest Store-rooms in the city, jam-up with a large and full line of Dry Goods, Notions, Hats, Gents Furnishings, Boots, Shoes, and everything in the Dry Goods line, why all you’ve got to do is to come to see is in the Price Building, 302 South Elm street. We are one for business, and promise to sell goods right FOR CASH. A. A. Hinkle. Proprietor.

This advertisement for the Big 4 Cash Store ran in the Greensboro Patriot in December 1895. The store was one of the first two businesses to occupy the Price building when it opened in 1895. The space on the corner at 300 was first occupied by Moore & McKenzie, a clothier whose motto was “We are all the time finding excuses to sell things cheap.” The space was later taken by Chisholm, Stroud, Crawford & Rees.

The Price Building was built on land occupied for most of the nineteenth century by Mayor Cyrus P. Mendenhall’s home “the Elms,” a Greek Revival composition that remains in spirit through the façade of a house in Fisher Park. The Price Building was among the finest in the city when constructed. Its red brick walls are contrasted with pale granite window sill and lintels, and the façade initially featured an elaborate pressed metal cornice. Though nearly all original detail has been stripped from the building, a ghost sign remains on the side promoting long-gone former tenant Silver’s Dry Goods.

Style: Greensboro Vernacular. Listed to the National Register of Historic Places in April 1980 as a contributing structure within the Downtown Greensboro Historic District. 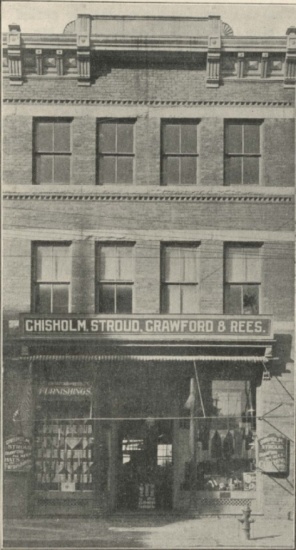