The Kress Building was built in 1930 according to elaborate designs by architect Edward Sibbert. The Kress chain of five-and-dimes held a reputation for significant architectural compositions. The company’s founder, Samuel H. Kress, envisioned his stores as works of public art that would contribute to the cityscape. Architect Sibbert was a graduate of Cornell University, and this Greensboro store design was the first under his employment as the corporate architect for the Kress Company. The builder was G. A. Miller of Tampa, who stated in the local paper “Of the new Kress Greensboro store it may be sincerely said that there is no finer building of its kind in the world. It is a distinct addition to the business center of the city and a store of which Greensboro may be proud.” The facade of this nationally celebrated building includes polychrome terra cotta tile featuring floral, fern, and animal motifs supplied by the Atlantic Terra Cotta Company of New York. The basement and first floor were used as sales space. The second floor contained offices and a lunch room. Third and fourth floors were used as storage. The building was restored in 2001, and the terra cotta was restored by Van Der Staak Restorations of Seagrove, NC. Private. 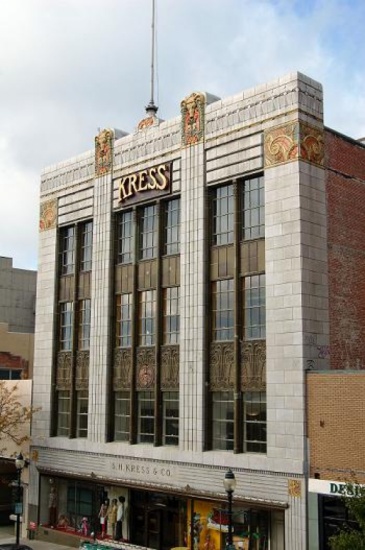