The Indiana Soldiers & Sailors Monument, located on Monument Circle in the center of downtown Indianapolis, has come to symbolize both the state of Indiana and the city of Indianapolis. Originally designed to honor the memory of Indiana’s Civil War veterans, it now commemorates the valor of all Indiana military men and women serving in all wars prior to World War I, including the Revolutionary War, the War of 1812, the Mexican War, and the Spanish-American War. Since its dedication in 1902, the monument has stood as a tribute to the past and an inspiration for the future as the only Civil War Monument of its size in America dedicated to the common soldiers and sailors. Although Indiana was geographically a border state during the Civil War, almost seventy-five percent of the state’s eligible men served in the Union army, a higher percentage than every other state except Delaware. More than 24,000 Hoosiers gave their lives to preserve the Union.

The cornerstone for the Indiana Soldiers & Sailors Monument was laid on August 22, 1889. By the time it was completed, the total cost of design and construction was about $600,000. It has been estimated that building a similar structure today would cost more than 500 million dollars. The monument is built of gray oolitic limestone from the Romana quarries of Owen County, Indiana. It stands 284 feet, 6 inches high, approximately 15 feet shorter than the Statue of Liberty. It is carved from Indiana limestone with bronze trimmings. Though most of its artwork relates to the Civil War, the monument also honors Hoosiers who fought in the Revolutionary War, the War of 1812, the Mexican War, and the Spanish-American War. 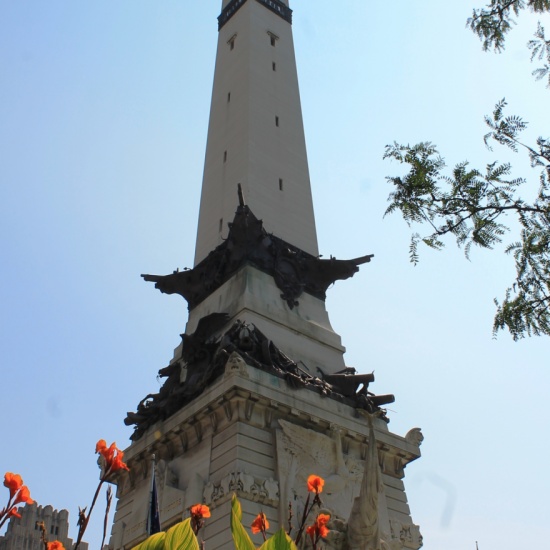