The first Catholic Church in Greensboro was established with St. Agnes church on Forbis Street in 1876. By the 1890s, the small sanctuary no longer met the needs of the city’s growing Catholic community. By September 1899, finishing touches were being made to a replacement for St. Agnes, known as St. Benedict’s. The new building was dedicated on October 30, 1899 by Bishop Leo Haid of Charlotte to a full house of 400 attendees. St. Benedict’s was a grand wooden Carpenter Gothic structure that stood amid a neighborhood of impressive Queen Anne-style residences along North Elm Street.

By the 1910s, the neighborhood was changing as a city trolley line was established along Elm Street and single family homes gave way to apartment houses and shops. In September 1918, the façade was reconstituted with stone foundations and a brick veneer. The original tower was lowered, and the structure was given a masonry appearance to blend with the surrounding urban landscape. The new façade incorporated crenelated rooflines, pointed arches, and stone-capped buttresses. The current rendition of the Gothic Revival façade remains well-preserved today, in spite of alterations to the stairs made as North Elm Street has been widened. St. Benedict’s remains the Mother Church of Greensboro’s Catholic community. 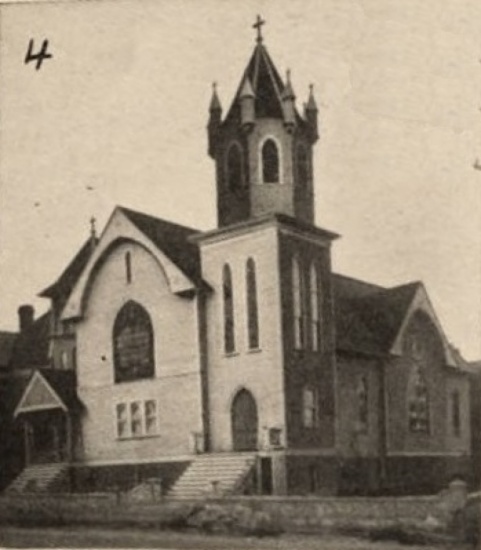