The Sweeney-Penn House was constructed around 1917, possible as a speculative house by Guilford Realty. The first occupants appears to have been Madge and Roy Sweeney, who owned the home only 18 months before selling it to Sue and John Thomas Penn, likely as an income property. Roy Sweeney was a traveling salesman and Thomas Penn was a tobacco leaf dealer before taking a job in 1917 as Vice President of Southern Atlantic Lumber Company, a wholesaler of North Carolina Pine and Oak with offices in both Greensboro and New York City. In 1921 the home was purchased by Emily and Charles McIver, the eldest son of UNCG founder of the same name.

The house was made available for purchase after an extended period of vacancy. After the City of Greensboro placed a Demolition Order on the house in 2009, Preservation Greensboro Development Fund assisted in the preservation of the house by providing legal work and identifying a buyer to restore the house with a period appropriate improvements such as a new kitchen and baths. The property was sold with a preservation easement attached to the deed that provides a dialog between future property owners of the Sweeney-Penn House and Preservation Greensboro to ensure that the house and its charming features are returned to good condition and remain for future generations to enjoy.

Today, the refurbished home is among the best examples of Craftsman architecture in Greensboro. The original form of the Bungalow came from one story buildings surrounded by verandahs built in India in the 19th century to serve as accommodation for travelers known as "dak bungalows." This Eastern influence can be seen in the Sweeney-Penn House, with the exposed wood gable trusses, the low and horizontal lines of the home, and the wide projecting eaves and overhanging gables with exposed rafters. Other details are typical to the style, including the wide open front porch with heavy timber porch columns atop masonry piers.

This property was listed as part of the Fisher Park National Register Historic District on 29 October 1991 and its restoration won an award from Preservation Greensboro in 2012. 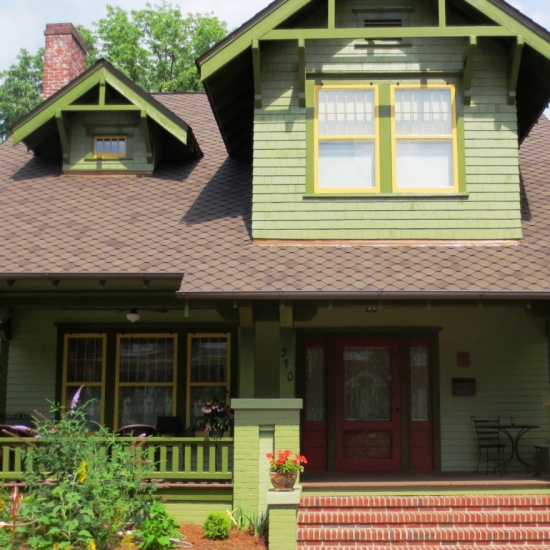