Designed by architect Frank A. Weston in 1904, the Dixie Building illustrates Greensboro’s maturity from a town of low-rise commercial buildings to a city with multi-story office blocks. Guilford County’s first skyscraper, the classically inspired Dixie Building was erected as the home of the Dixie Fire Insurance Company, a corporation that was a leader in its field in North Carolina by the 1910s. Architect Weston used popular Renaissance Revival details to embellish this tower, the tallest in the city when completed. The rusticated Mt. Airy Granite base of arched openings is topped by a fanciful array of features such as sets of paired windows, polygonal bay windows, arched windows, terra cotta ornament and a massive dentil cornice. The Dixie Building stands today as one of North Carolina’s best examples of early skyscraper development and presaged later exemplary skyscrapers such as the American Exchange National Bank and the Jefferson Standard Building, both one block north. The top floor was added around 1915. Private. 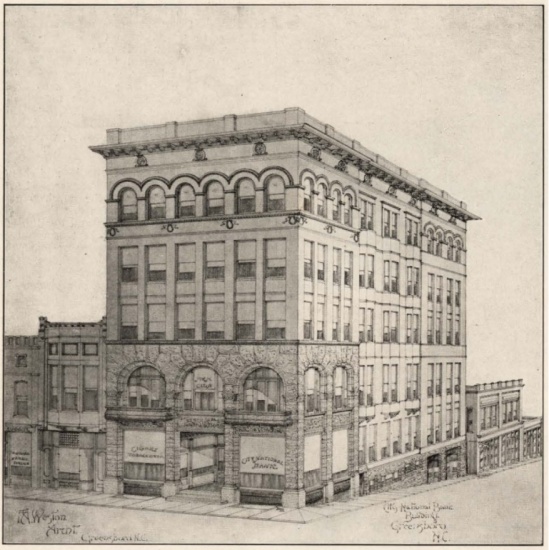