This three-story Victorian delight with a tower still stands at the corner of East February One Place and South Elm Street, though it has been dramatically remuddled with it’s tower removed and false siding covering the façade. The site of the building was first referenced on August 14, 1901, when the Greensboro Patriot newspaper announced that "It is understood that Dr. D. W. C. Benbow has bargained to sell the lot on the corner of South Elm and East Sycamore streets, west of the PATRIOT’S new home, to Mr. D. R. Huffines for the biggest price per square foot, ever paid for a piece of property in Greensboro. It is reported that the price is about $10,000." A November article followed stating that Mr. G. A. Miller had been granted permission to operate a saloon on the street-level. By January 1902, the newspaper described the progress of the building, stating “the second floor of the new Huffines building, corner of South Elm and Sycamore streets, is about all ready for occupancy. R. M. Albright, the local agent of Murphy & Co., the New York brokers, R. P. Walters, the insurance agent, and others will have offices there. The third floor of the building will be used as a lodge room.”

The towered building was the only example of its kind in Greensboro. No other turreted commercial buildings are known to have existed. It is likely the storefront was remodeled in the 1930s when exuberant Queen Anne architecture was seen as eccentric and dysfunctional. Today, the façade provides no hint of it’s exuberant original composition.

Style: Remodelled. Listed to the National Register of Historic Places in May 2004 as a contributing structure within the Amended Downtown Greensboro Historic District. 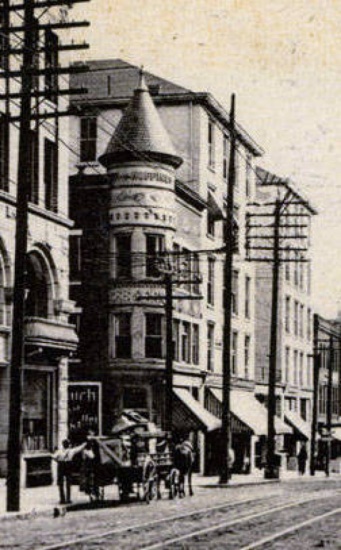