The Lindeman House has a remarkable past. Its builder and at least two subsequent owners were capable women with a statewide influence in historic preservation. The house was designed by architect Harry J. Simmonds and built in 1926 at a cost of $20,000. A news article stated, “This attractive home … is considered one of the show places of that section of the city. Set off to advantage by its elevation from Parkway on which it is located, this home is a source of constant delight to the owners and never fails to attract the admiration of visitors.”

The Tudor-style house features restrained details common to the style, including a half-timbered second floor of a projecting central pavilion and an overhanging second floor supported by brackets. Other charming features include a wall dormer to the right of the central pavilion, diamond leaded glass windows, and shutters featuring a shield cut-out. Originally, the brick of the first floor was unpainted, and the dark timbers of the second floor were contrasted with lighter colored stucco. The gardens of the house once extended northwest to Bessemer Avenue.

Mae and Sidney Okes Lindeman built the house on the primary avenue of the Fisher Park, Extended, neighborhood. Sidney served as the Carolinas manager for Frigidaire and the Domestic Electric Company (Delco). The couple had four children: Edith, David, John, and Betty Ann. Sidney held leadership roles in the community, including campaign director of the Community Chest.

In 1944 the house was sold to Maude and James Edwin Latham as their retirement home. Latham was a former cotton broker who developed the Parkway property as part his Fisher Park, Extended, development. They stayed there until their deaths; James Edwin in 1946, his wife Maude in 1951. The property passed to their daughter May Gordon Latham Kellenberger. The mother and daughter team is notable in North Carolina history because they worked on rebuilding Tryon Palace in New Burn, Maude’s birthplace. Their most productive years in the project were accomplished from the Parkway house. Her death, it was reported, “came in her 80th year and at her home at 306 Parkway, where walls were papered with city maps she studied to aid her in working.” The house was included in the 2017 Tour of Historic Homes & Gardens. 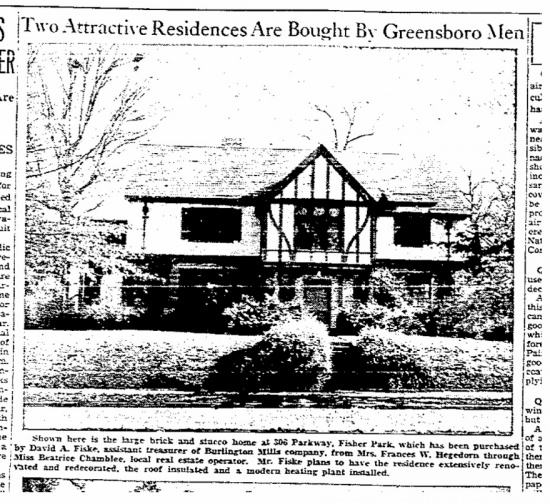