On the date 12-12-1912, the Greensboro Patriot newspaper announced that “Mr. and Mrs. E. W. Lyon have moved into their handsome new home in Fisher Park”. The Lyons were well known in Greensboro at the turn of the century, having previously lived in a grand Victorian residence several blocks closer to the city center. Edward Lyon was a mining engineer who consulted on various copper, silver, and coal mines here in North Carolina. He even owning a gold mine near Rocky Mount! The house is inspired from the classical architecture of the Colonial Period, featuring a central gable topped with demilune window. A generous front porch is supported by Tuscan fluted columns and is topped by a balustrade. To each side the symmetrical facade are tripartite windows, brick corner pilasters, and dormer windows. The formal architecture of the house was to evoke tradition and substance, both important qualities during the Edwardian era of history.

The Lyons sold the property to Mary and Charles Dorsett in 1915. The house remained in that family until 1938, at which time it was heavily remodeled with interior and exterior changes. The house deteriorated severely in the early twenty-first century before being sold for a complete restoration in 2016. 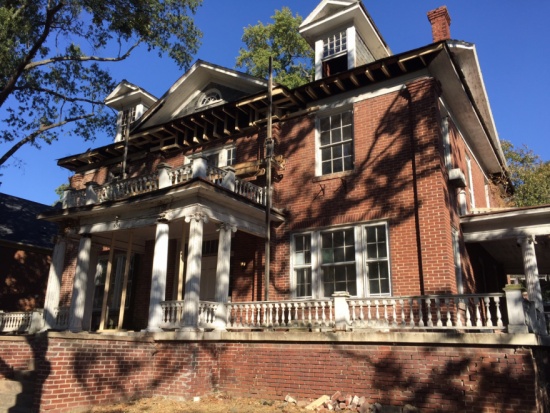