Charlotte Hollingsworth and George Hammitt Walker built this grand residence in 1919. The couple named their homes, including this one, “The Eagle’s Nest” for a large statue of an eagle they placed atop one of the granite piers at the front entry to the yard. Tragically, Mr. Walker died just 10 days after he and his wife moved into their new home. Later occupants include Laura and Charles P. Carmichael. Carmichael was the buyer and sales manager of the J. W. Jones Wholesale Grocery on South Elm Street where Natty Green’s is located today. Matha Stanley purchased the home in 1938. It was Matha’s husband Roy, owner of Gate City Roofing Company, who added an exterior door at the base of the stairs to allow the upper floor to be rented as an extra source of income. Matha Stanley sold the property in 1979 to Paula White, who remains the owner today.

The house is a hybrid design that blends several styles, including a Dutch Colonial gambrel roofline, a triumphant arched Neoclassical-style portico, Colonial Revival dormer windows, and even Shingle-style siding. The home is built upon a milk-quartz foundation, a local stone said to be the world’s third hardest rock. Interior appointments are unusually sumptuous, including floors of Birchwood, railings of Mahogany, ornate mantels, plaster cornices, and coffered ceilings. Unusual features include the curved, or “ogee” French Doors, and stained glass windows in the dining room.

The house was modernized after a 2004 fire, including renovations that upgraded bathrooms, kitchens, and mechanical equipment while retaining the original floor plan, architectural features, and finishes. All restoration work was completed to the Secretary of Interior’s Standards for rehabilitation, which earned the project state tax credits of 30% of the project cost. In addition, the homeowner applied for designation as a Guilford County Landmark that qualifies the property for a limited property tax deferral.

This property was listed as part of the Fisher Park National Register Historic District on 29 October 1991 and was locally designated as a Landmark Property July 2008. The restoration won an award from Preservation Greensboro in 2008. 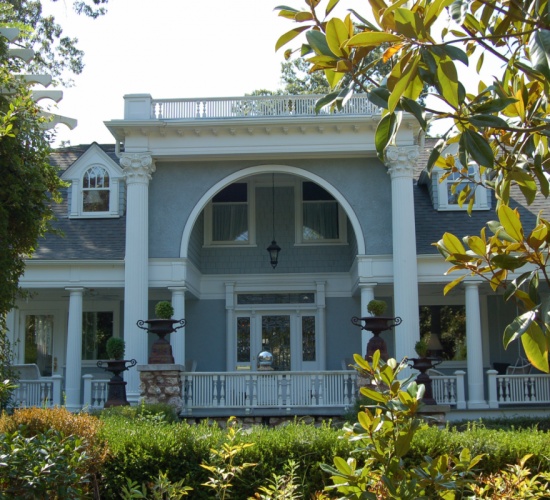