Indigenous artifacts found on this site indicate that it was used as a campsite. From pioneer days, it has been a focal point of the Village. The walking bridge connecting it to Goat Island—so named as it was populated by goats in the spring and summer months for many years— was installed in the mid 1960s. The Spring is located beside the Village's Harbour and currently is a busy picnic area for residents and boaters that ply the Historic Rideau Canal.

Rainbow Bridge Trivia: The bridge was delivered, already made and in one large piece, on the back of a flat-bed truck in the 1960’s. At one point, during its way through the village, it became wedged as the truck attempted to make a corner and a great deal of manoeuvring, as well as the temporary removal of a telephone pole, was needed to get it to its destination. 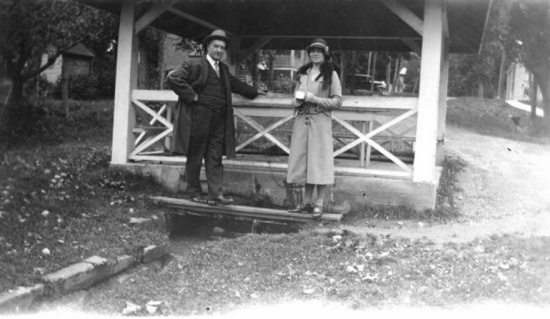 Westport Spring and Rainbow Bridge ~ The Foot of Fetch Murphy Walk
Photo By: This photo (circa the 1930s) shows Fred and Muriel Forrester at the Westport Spring. Muriel is holding the communal cup.