Located on North Elm Street, just north of downtown Greensboro’s Jefferson Square, the Younts-DeBoe Building was constructed in 1923 during a period of prosperity and growth in the Gate City. Younts-DeBoe Clothing was formed by M. S. Younts and George Herman DeBoe as a men’s clothing store. Exuberant features of this Beaux-Arts commercial building include a façade of polished granite and a noteworthy ensemble of glazed white terra cotta tile that include elements such as tracery, dentil cornices, floral window and door surrounds, medallions and stylized sunflowers. Inside, a terrazzo entry area is emblazoned with the brass initials of the business. The two-story building provides North Elm Street with a classical façade that reflects materials and design often utilized for costlier office towers built north and south of the site. Private. 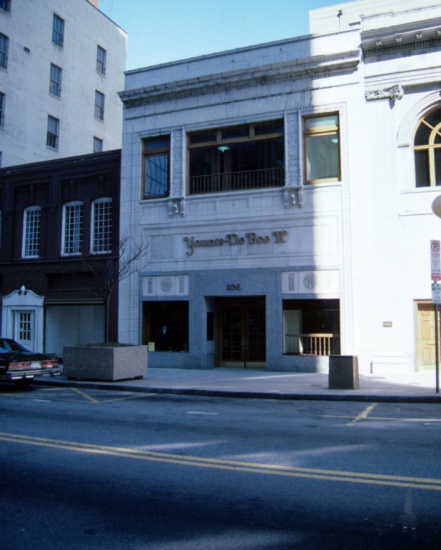