Warren T. Tate built this impressive two & a half story house at 228 N East Street replacing a one story dwelling. Tate moved to Indianapolis in the 1860s to build a lumber planing mill similar to the one he had in Lawrenceburg along the Ohio River. Charles G. Mueller, German born and trained architect with a local Indianapolis practice, was commissioned by Tate to design this house. The Tate-Willis House was noted in 1962 by Wilbur D. Peat in his "Indiana Houses of the Nineteeth Century". The Willises owned the property the from 1940s until 1998 when Jeanne and Tom Gaunt bought it. The Gaunts had raised their family already but adopted 10 sibblings in need of a home shortly after they moved in and raised their second family in this large home that could accomodate 10 children and 2 adults. In 2017, with an empty nest, the Gaunts finally realized their dream of running a Bed and Breakfast. They welcome guests from all over the world and in both 2019 & 2020 were awarded the "Best Hotel in Indianapolis" by the Indianapolis Award Program.

Please note the historic picture of the billboard and the radiator shop. The billboard obscured the view of the Tate Willis house for many years. It was a true neighborhood celebration when the current owners, the Gaunts, took the billboard down. They sacrificed a good monthly income for the sake of improving the neighborhood as that bill board grandfathered in when the ban on billboards in the regional center was implemented. A gasoline station had been on the site between 1915-1927 replacing a house similar to the Tate-Willis home. A cinder block structure replaced the gasoline station some time between 1927 and 1941 and became a radiator shop. in the early 2000s it was made into a mother-in-law’s home. today it serves as part of their B&B and is a popular place to stay. 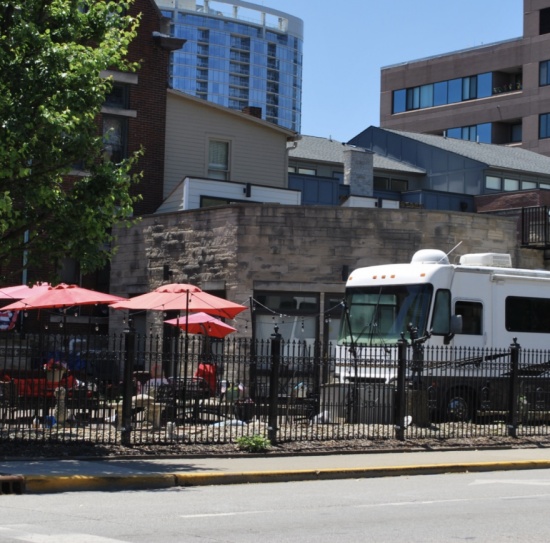