The First Parish Meetinghouse (at today's 143 Main Street) had served as the religious and political center of the village of Sandwich into the early 19th century. However, the need for a new civic building was prompted by the formal separation of church and state. At its 1834 Town Meeting, the town voted to erect a new Town Hall at the intersection of Main and Grove Streets on bog land donated by the Newcomb family at 8 Grove Street.

Construction was preceded by extensive filling of the marshy land with gravel. The large building included an upper hall capable of seating 500 people. Town meetings were held here. Originally the upper level was reached by stairways in the front corners of the building accessed from the front porch outside.

In 1912 the word SANDWICH was added above the words TOWN HALL on the front of the building (see old postcard of Town Hall with bunting). In 1914, a fourteen-foot addition was made at the south end, to contain, among other things, a stage and dressing rooms, indicating the upper hall’s use for theatrical productions and, later, movies.

Over the years, there were various occupants in portions of the ground floor such as stores, carpenter shops, a newspaper printing office, the library and early Historical Society offices. Eventually, as fortunes changed in the town, the first floor was taken over by town administrative offices and the second floor ball room was relegated to use as attic storage.

In 2009 the entire building was restored to its former glory. The second floor ballroom is particularly beautiful with its historically accurate stenciling of tan and brown paint and gold leaf, theatrical stage, balcony seating and fully restored historic shuttered windows. In 2011 the Sandwich Town Hall was granted a Preservation Award for Rehabilitation & Restoration by the Massachusetts Historical Commission.

--After returning from Grove Street, pass by the Dexter Grist Mill and take the pedestrian walk way to the Dunbar House and Tea Room and go left down Main Street and return to the starting point opposite the Brown Jug. 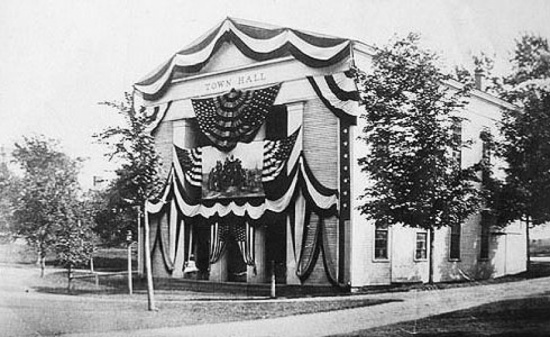 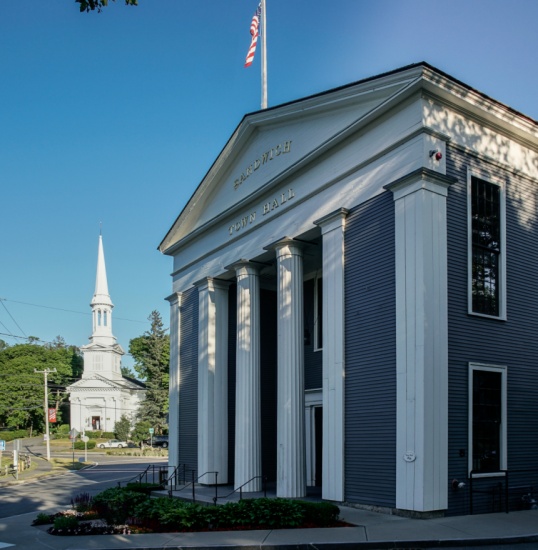