In 1639 this spot was set aside for public use and a thatched-roof Meetinghouse was built. In 1704 it was replaced by a larger, 2-story Meetinghouse. Town meetings were held here and it was also home to a Calvinist/Congregational parish.

But when the clergyman, Jonathan Burr, began to preach hard Calvinistic doctrines contrary to his wide liberal background, the people rebelled. One parishioner nailed his pew shut and boarded over the top. In 1811 Burr was prevented from occupying his pulpit and could not make himself heard due to outsiders chanting in the gallery. He marched out with his followers and held service elsewhere.

In 1748, pastor Abraham Williams brought with him a 19-year old black slave named Titus Winchester. Williams offered his slave freedom but Titus preferred to wait until his master’s death in 1784 before becoming free. Titus then went to sea as a steward and, when he died in 1808, left his entire estate (approximately $1,100) for the purpose of purchasing a two-faced clock for the Meetinghouse “so that it would ring for many years to come in memory of his former master.” The clock faces were south (toward Main Street) and west (toward River Street). The clock came to be known as “Old Titus."

But the clock you see today is not the original. One Sunday night in 1873 some control snapped and the clock struck off 406 bongs of the big bell before running down. A new four-faced clock and a larger spire were installed in 1880. 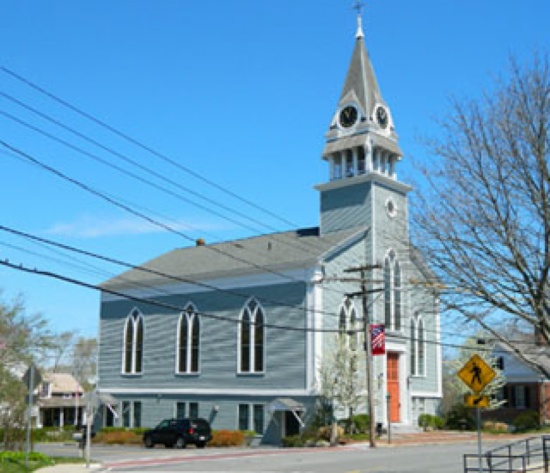