The town purchased the former Cooperative Bank building in 1977 relieving pressure at the time to rebuild the interior of the old Town Hall.

The building is on the site of what was known as the "Boyden Block" owned by William Ellis Boyden. It consisted of a long building of several shops and a large meeting hall upstairs. There was also a large livery stable where Boyden kept his horses and stage coaches. He ran a stage coach operation between Plymouth and Sandwich starting in 1822. The Boyden Block was built in 1857 by Gustavus Howland who also built the Boardwalk. He was the son of Ellis Howland who built Sandwich Town Hall in 1834.

In December of 1913 the Boyden Block was destroyed by fire. According to an article in the Barnstable Patriot, at the time of the fire, the Block was home to a paint shop, fruit store, furniture upholsterer, a hat store, a variety store and electrical contractors. All eighteen horses from the livery stable were rescued but most of the beautiful Plymouth stages were lost. 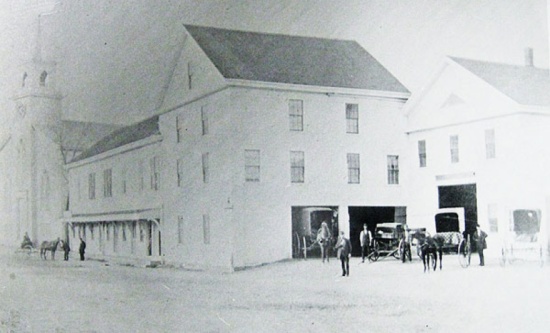