2. Horses Hauling Logs at Up River

2. Horses Hauling Logs at Up River

Horses Hauling Logs is a large oil painting, and is the best known work by Andre Lapine. The image was created based on a visit to Quebec c.1930. Andre Lapine had come to Canada from Holland in 1905, shortly after marrying longtime beau Gertrudia Columbine. Taking land in Manitoba originally, he attempted to farm, which was either not to his liking or perhaps his passion for painting drove him to the city - it's not entirely clear. He moved to Toronto shortly thereafter, where he began working with Fred Brigden at the Toronto Engraving Co., which later changed its name to Brigden's Ltd.

Brigden's was one of the largest commercial art studios in Toronto, creating illustrations for Simpson's and Eaton's catalogues. Lapine became very well-known for his hyper-realistic illustrations of lace and fur. His popularity quickly grew in the arts community.

Lapine's work was frequently seen on the covers of the Toronto Star Weekly, and he officially became a member of the Ontario Society of Artists (OSA) in 1909. By 1919, Lapine was elected to the Royal Canadian Academy. His work was selected and purchased by the National Gallery of Canada as well as the Art Gallery of Ontario (AGO). 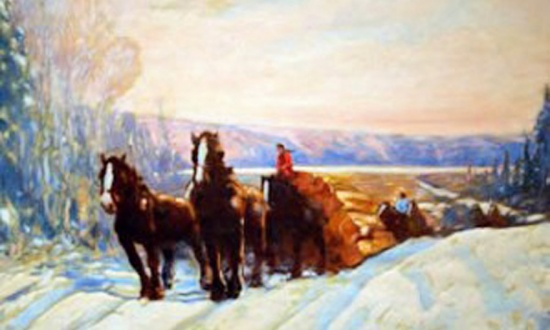