4. Forest Interior at the Dominion Hotel

4. Forest Interior at the Dominion Hotel

Forest Interior is the closest example of Lapine’s use of the Impressionistic style. Lapine was known for dabbling in a variety of styles, and excelling in whatever form he attempted. Malloney's Art Gallery in Toronto provides us with detailed insight into the artists eclectic skill-set, stating: "[Lapine's] sixty years of active painting have been divided equally between the Old World and the New. Sixty years ago he began to paint in Paris in the hey-day of the great Impressionists, (Manet, Money, Sisley, Pissaro, Raffaelli, Renoir). He came to Canada just as the Group of Seven were transplanting Impressionism to the Canadian scene. He saw Impressionism rise and wane in Europe and then rise and wane in Canada. He had close, personal contacts with the great masters of both movements, knew what they were doing and why they were doing it. There is probably no painter in the world today who has had the unique opportunity to live in the very midst of two such vital and important artistic revolutions." 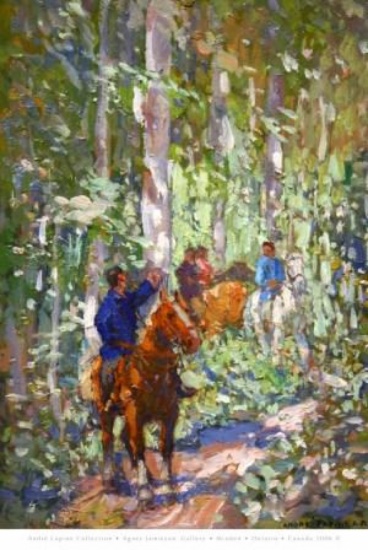