5. Mill Scene at the Beaver Theatre

5. Mill Scene at the Beaver Theatre

Mill Scene is a local image of Minden portrayed by Andre Lapine. Why was Lapine fascinated by horses? There are multiple reasons! Lapine emerged as an artist at the heigh of the Industrial Revolution. This was a time of major societal shifts, and it is a well-known fact that many artists grappled with this change. The whimsical details of a simplistic lifestyle - which were the basis of many artists inspirations - were suddenly replaced by the coldness of mechanics and efficiency. Horses represented a chapter from the past; a connection between man and nature that proved effective yet natural. Within the wild woods of Northern Ontario, Lapine believed there was nothing more organic and mesmerizing than watching the determination and grit of horses. He became known as "the Gentle Cavalier," depicting horses in such detailed realness that the audience could feel the movement, muscle, and force of each animal.

Lapine also had a debilitating fear of automobiles. He never drove, and never got his license. In 1934, tragedy struck when Lapine was crossing the road in Toronto, and was hit by a moving vehicle. His injuries were severe and it appeared unlikely he would survive. He was sent to St. Joseph's Hospital in Toronto to attempt recovery, which was where he met life-long friend, Agnes Jamieson.

Lapine managed to survive the accident, but was never quite the same. In the 1940's, the Lapines moved to Minden, staying at Billy Hamilton's Farm on South Lake. It was time for Lapine to remove himself from the hustle and bustle of the city art scene, and enjoy the tranquility of nature. There are residents of Minden who remember him walking the roads with his paint-box in hand, or joining Dr. Agnes Jamieson during her calls across the community. 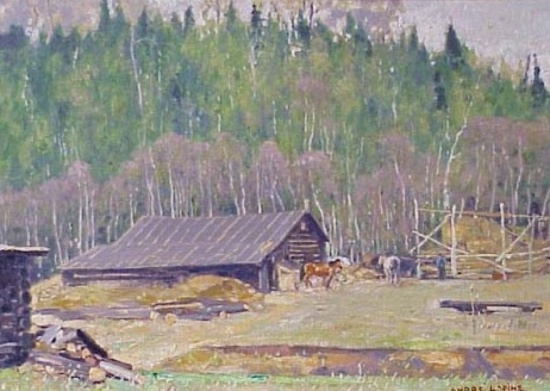 5. Mill Scene at the Beaver Theatre
Photo By: Mill Scene