There’s been a lot of activity and a few address changes on this parcel of land over the years. It had two houses on it in the late 1800s which were owned by brothers Charles and George W. Reed. Charles was the State Librarian for many years, and his brother George was the Secretary for the National Life Insurance Company. The Prudential may have grabbed the logo first, but National Life has been Montpelier’s very own Rock of Gibraltar for over 150 years. It’s history is described in the point of interest labeled "The Country Doctor and the Hometown Hero."

The company acquired the properties on this plot and financed the construction of the building you see here now. It served as the 6th home office National Life had moved into since it was founded. The other five were scattered along the street here and we’ll see a lot of them before we’re done. They moved into this building in 1920. As you face it, you might think the design looks a little off balance, and you would not be wrong. If you peek around the left side of the building, you’ll see most of that exterior wall is done in a dull yellow brick with no granite facing. It was left this way because the original plan was to put another wing on the left that matched the right when the time came to expand again. This would result in a much larger building with the main entrance serving as a central portico. But it never happened.

Instead of expanding in place, National Life left this building in 1960 for its current headquarters on a hilltop above the city. The State eventually bought the vacated building to house the Tax Department, and surely there’s a joke in there somewhere about life and death and taxes.

During business hours the Tax building is open to the public, and the ornate, vaulted ceiling of the lobby just inside the door is worth a quick look.

In the entrance vestibule, you’ll also see a bronze relief of Daniel Leavens Cady, a certifiable Vermont “character”. Born in Windsor in 1861, he became a New York City lawyer who retired to Vermont to write poetry. I’m not sure why he came to be memorialized in this way, but as you can see from the bronze likeness he was said to never be without his top hat, and stories have it that he was also something of a humorist who liked a drink or two now and then. 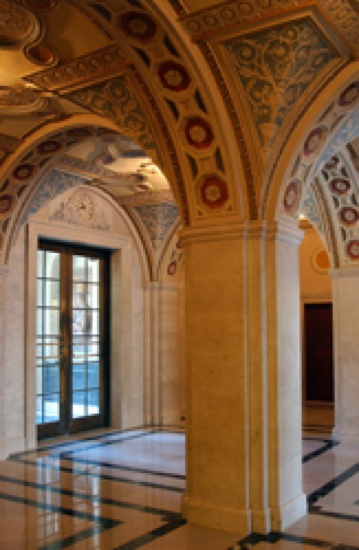