Of the many plantations in the Baton Rouge area, Allendale is one of the few plantations whose story is practically erased from history. Allendale planation is named after one of its many owners, Henry Watkins Allen. Henry Watkins Allen,18th Governor of Louisiana/ 2nd Governor of Confederate La., purchased Allendale Plantation in what is now Port Allen, La. in 1852. Allen spent $300,000 and the planation had approximately 125 slaves when he bought the planation. Allendale planatation was mainly a sugar and tobacco plantation. It thrived during the Antebellum era and was one of the only sugar planattions in West Baton Rouge. The house itself was burnt down by by Union soldiers during the Civil War. However, despite there being no physical house, Allendale continued to operate with slaves throughout different ownerships and decades.

Allendale operated as a typical plantation in the South. It had an overseer, drivers, cooks, and field-hands. Valery Trahan, born in 1829, was purchased by Allen shortly before the Civil War. Trahan was Allen’s personal servant. He shined Allen’s shoes, delivered his mail, acted as his valet, etc. Allen brought Trahan with him into the War, but ended up emancipating Trahan during the war. After doing this, Allen fully employed Trahan as his valet and paid Trahan as an employee of the State of Louisiana. After the war, Trahan moved back to Port Allen with his family and lived on the outskirts of the Allendale property. When the house burned down, a large group of slaves left after the war, but not all.

What isn’t covered or known is the ownership of Allendale immediately after the Civil War. In 1886-1882, the plantation was owned by John J. Marshall. Marshall was running Allendale as if nothing had changed, even though slavery had officially been outlawed. There were approximately 92 slaves when he acquired the land, but the exact number is unknown. Marshall kept an incredibly detailed ledger about approximately 23 laborers on the Allendale planation land. If there was no date written down, then one would assume that it was a ledger of a plantation pre-civil war. The only difference is that the African American laborers were getting “paid.” The odd thing is that Marshall typically resided in his home in Shreveport, La, which means that someone was watching the African American laborers close enough to report back to Marshall. He noted who they were, what they did, how much of his money they spent, if they brought in any revenue. He wanted to see if his laborers were up to their “full potential.” He was so exact to even calculate how long each laborer was sick and how many days work they missed. Some laborers were Sally Adams, a seamstress/farmer and Chubby Willis, a farmer. The history of Allendale is important to keep discussing because even though there is no longer a physical house, the land was still being used/operated like an actual plantation for many years. The people who lived and worked there for years deserve to have their stories recognized and told. Slave history goes deeper than a physical planation house. 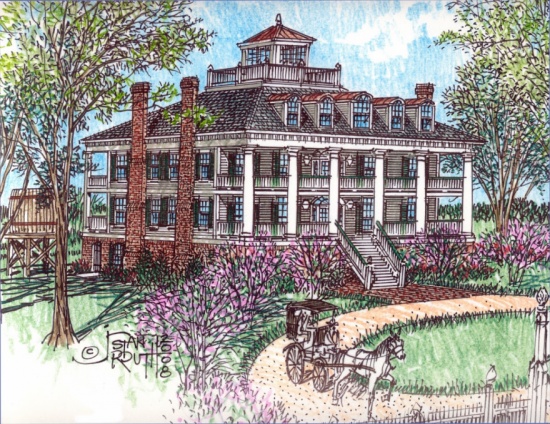