On April 18, 1815 surveyor Alexander Holmes entered into a contract with Edward Tiffin, Surveyor General of the Northwest Territory, to establish the Baseline. He was also to survey a portion of the 96 townships that had been set aside to be divided and used as payment to soldiers and officers who had served in the Revolutionary War. Holmes received permission to give half the contract to his surveyor brother, Samuel. The contract stipulated a payment of $2.50 per mile of township and section line surveyed, and $3.00 per mile of baseline surveyed. Each surveyor had to pay his own crew out of these funds. They measured their path with a Gunter's chain, cut down trees that were in their line of sight, and planted posts every half mile along their path.

At the time the area which is now Northville was a heavily wooded forest and vey swampy. When Michigan was part of the Northwest Territory, the Federal government desired to sell and settle as much land as possible. This necessitated a systematic, economical method of parceling out the land, which we now call the United States Public Land Survey System. Land was divided into townships measuring six miles by six miles, then townships were later subdivided into square mile sections. The first step was establishing vertical and horizontal axes. 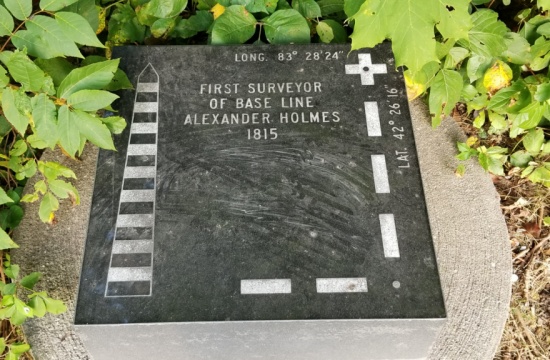