The start of the weekend introduced the end of a workweek and allowed white individuals downtime to seek entertainment. At this time, violence perpetrated against black people was a type of amusement for white people. Therefore, Saturdays were the most popular day of sale. At eleven o’clock on Saturday mornings, enslaved people were brought to the front door of the courthouse to have their lives bid upon by consumers of the slave trade.

The slave auctions, under the guise of entertainment, served to reinforce the idea of slaves as property. In one instance that took place on August 4th, 1860, a young, enslaved woman by the name of Judith stood at the door of the courthouse, clutching her infant close as onlookers put a price on their lives. One can imagine the horror of the young mother, unsure if these were the last moments she shared with her baby. Judith and her child, as well as many other enslaved peoples, were sold alongside plots of land, crops, and farm animals that day. Judith’s experience was shared by millions of slaves sold at auction; Of these, hundreds if not thousands at the East Baton Rouge Parish courthouse.

This heinous dehumanization of people of color was supported by Baton Rouge’s governmental system. While the courthouse that once hosted these atrocities now is nothing but a piece of land next to one of its replacements, the justice system that promoted it is the same. Buildings may crumble, but the actions of this system have caused a ripple effect of racial prejudice that remains ingrained into American society to this day.

Joseph, O. Tracy et al. “Louisiana’ Historic Courthouses: A Look at the Past and the Present”. http://files.lsba.org/documents/publications/BarJournal/Feature-Courthouses-June-July-2016.pdf. 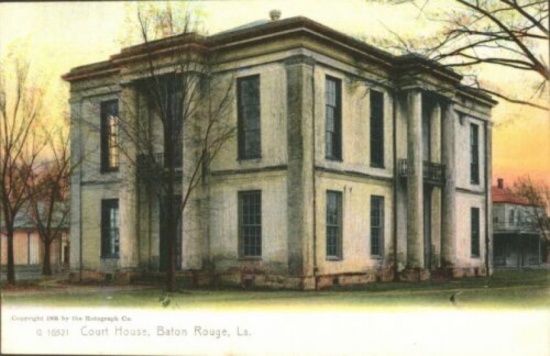