During the times of slavery, we learned that one way enslaved people tried to beat the system was running away to gain their freedom. For some this worked out, but sadly for others it was not as good an outcome as they were hunted down by men and dogs and received punishments for their actions. If an enslaved person was not able to be identified or claimed by their “master” then they were put into what is called a slave depot. Essentially what this was, was a jail for runaway slaves. This is where they would stay until they were either claimed, or until they passed away.

Slave depot’s began in the 1820’s as multiple jails across the state of Louisiana which included depots in St Landry Parish, Ascension Parish, St Tammany Parish, East Baton Rouge Parish, etc. These prisons lined the Mississippi River due to the fact that it was a common area for enslaved people to escape through. The Baton Rouge Depot was located at the Intersection of Africa and St. Ferdinand Street which today is Louisiana Ave. and St. Ferdinand. If you go there today, the Baton Rouge City Court takes its place and leaves no remnants of what used to be.

The life of an enslaved runaway in jail was not one that many would want to be a part of. If an enslaved person was captured they were sent to jail and if they were not claimed within 2 months, they were then transported to the depot nearest to where they were caught. If 12 months went by, they would then become property of the state and state officials could put them to work doing whatever they wanted. They were sent to hard labor, with elements of the weather, nature, and man all against them. Whatever work contractors had no desire to do, enslaved chain gang’s were forced to work on. A few projects they worked on included levee building for Pointe Coupee Parish, Building an embankment from the Mississippi River Levee to False River that would be big enough to fit a road, and the Baton Rouge to Clinton Railroad. Also, cities such as Donaldsonville gained recognition for their town and how nice it was yet most of the construction was done through slave labor in chain gangs. During these projects prisoners had to endure searing heat, torrential rains, marsh, mud, and illness. During the first year of construction on the Baton Rouge to Clinton Railway, 11 prisoners died due to illness which caused the state engineer to give up on the project. Nobody would bat an eye to stop this however due to the mindset of people in the south and because the law looked favorably upon this because it was the cheapest form of work since they only had to pay for “incidental expenses.”

This all matters because it is hard to find any information on this subject and it is still happening today. The Angola Prison here in Louisiana still utilizes forced labor in the prison. People who end up there are required to work on fields and in factories all for the prison to run. Prisoners who end up there are forced to work at the bare minimum 90 days out in the field and then they may apply for other jobs. The point that is not clearly seen is there are not enough jobs for people to get out of working in the fields. They also fail to accommodate inmates with disabilities and put them to work in the fields or factories. An example of this is back in 2016, an inmate by the name of Clyde Carter tore a ligament in his knee yet he had to work because his work release form kept “expiring.” Many categorize this prison as a “for-profit” prison due to the fact that each inmate makes about 2 cents per hour of work, and the inmates harvest their food and keep the prison running. Currently, lawmakers are trying to completely abolish this trend all together by amending the state constitution which mirrors the US constitution. The issue being the 13th constitution which outlaws slavery and involuntary servitude, except in cases where someone was convicted of a crime. States such as Rhode Island, Nebraska, Colorado and Utah have all abolished this form of “punishment” and Louisiana is working on it now.

Paterson, B. (2021, April 8). Slavery in Louisiana's prisons? this lawmaker wants voters to outlaw forced labor for good. The Courier. Retrieved May 5, 2022, from https://www.houmatoday.com/story/news/state/2021/04/08/slavery-louisianas-prisons-lawmaker-wants-voters-outlaw-forced-labor-good/7137837002/ 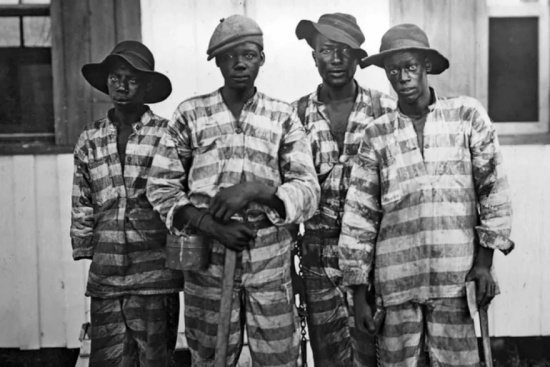