Burleigh Spalding was born on December 3, 1853 in Vermont. He made his way to Fargo where he both defended a convicted murderer as a lawyer and was a U.S. Congressman - at the same time.

Raised in Vermont where he attended military school, Burleigh began studying law in his spare time and became a practicing lawyer after moving to the Dakota Territory. He was part of the North Dakota Constitutional Convention and after two terms in Congress, was appointed to the North Dakota Supreme Court,serving from 1907 until his defeat in 1914. Along with his work in law and politics, he founded and was President of Merchants National Bank of Fargo.

Of several cases Mr. Spalding worked on, perhaps the case of John Rooney would be his most memorable; it has certainly left an impression on North Dakota. John Rooney was hanged in Bismarck Penitentiary on October 17, 1905 making him the last person legally executed in ND, and the only person executed indoors in the state. Charged with first degree murder in summer 1902, he was convicted in 1903, just as Spalding began his second term in Congress.

Why Stambaugh and Spalding took the case is unsure, but it went all the way to the United States Supreme Court, not because of the allegation, but due to a change that had been made in state law during the trial. The murder charge was never overturned and the charged man never waivered in his insistance on innocence. At his execution, John Rooney thanked his lawyers, Stambaugh and Spalding, for their “noble fight for the life of a penniless man.” (2)

This point of interest is part of the tour: Walk with the Dead: Fargo's Riverside Cemetery 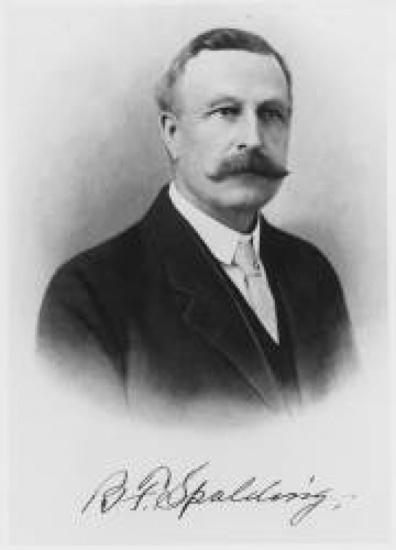