The Calumet Inn was built in 1887-1888 as a three-story Sioux quartzite structure, providing a corner space for a bank and accommodations for 50 guests. The stonework was in a style known as broken ashlar. The outstanding features of the building are the large red quartzite arch over the northwest door, the corner door in the northeast corner, and the north cornice. The original cost of construction was $30,000. The hotel opened on Thanksgiving Day 1888. The building was fire-proof, with hot and cold water running throughout and every room was connected to the office by a series of bells.

It was enlarged in 1899 with a three-story addition to the rear in order to provide more guest rooms. The addition can be distinguished from the original building by the first floor window caps which are rounded on the addition instead of square. A second addition in 1913 added a fourth floor, making a total of 90 rooms. The original oriel window and exterior balcony were removed in 1912. The hotel was deemed unsafe in 1978 and closed. It was purchased in 1979 and after an extensive rehabilitation, which included replicating the oriel window, but not the balcony, it reopened in 1981. 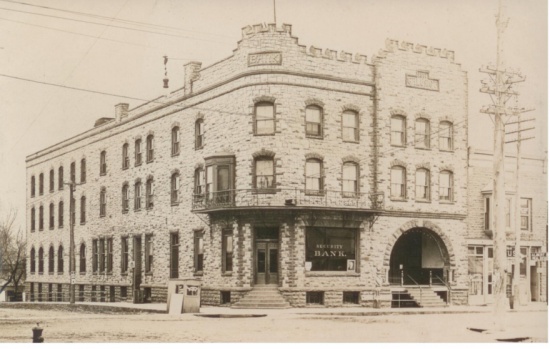