When WW2 ended the base was no longer needed but as the Cold War started to warm up it was completely re-built in order to take the new generation of heavy, nuclear armed bombers. The central runway was extended to 10,000ft but the B-47 Stratojet bombers based at Greenham were so heavy it soon cracked up. It was extended to 12,000ft and became one of the longest runways in Europe. In places it was 4ft thick. Take a look at the distant tree lines to west and east and you’ll get an idea of just how long the runway was!

When the restoration programme started in 1997, over 1 million tonnes of material, mostly concrete and asphalt, needed to be broken up on site, then recycled and sold. The revenue from the sale helped fund the restoration of the open areas to rare heath and grassland. You are standing on what was the centre of the runway as shown by thecross in the picture. 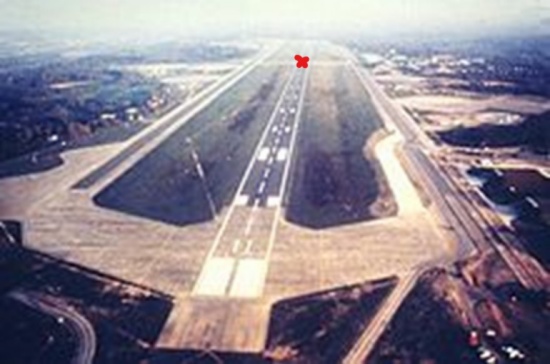