The statue atop the golden dome is not a historical figure, it’s a goddess. She's Ceres, the goddess of agriculture and fertility, and we’ve had three versions of her atop the dome over the years. The original was carved from Vermont pine and installed as part of the 1858 construction, but unfortunately, the goddess rotted away and fell into pieces when it was removed in 1938. The Sergeant at Arms at the time was a man named Dwight Dwinell, and although he wasn’t a trained sculptor he agreed to have a go at carving a replacement from Ponderosa pine, which was supposed to be harder than the Vermont version. The result was a lovely piece of folk art rather than a more classically polished piece, but we loved it, and at such a height it was hard to pick out the flaws anyway. It turned out Ponderosa Pine isn’t much hardier than the Vermont variety. It lasted until the spring of 2018, when once again the weather-soaked goddess was delicately lifted from the dome, in one piece this time.

The latest version of Ceres has been carved from Honduran mahogany for maximum durability. While the artist, Chris Miller, was working on the project, the dome also underwent major renovations and re-gilding. It would be hard to overstate how beloved Ceres is in the local psyche. When she returned in November 2018 there were over a thousand people here to celebrate as a giant crane floated her into place. A delightful fun story: As a tribute to our popular and very dedicated State House Curator David Schutz, the artist is said to have carved a small likeness of his face on the back of the statue, amongst the sheaves of wheat. Complete with his trademark bow tie. 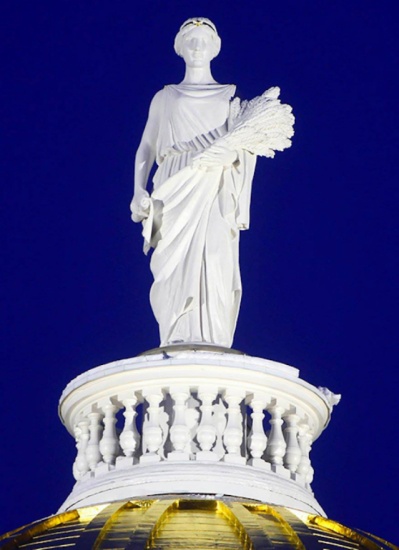